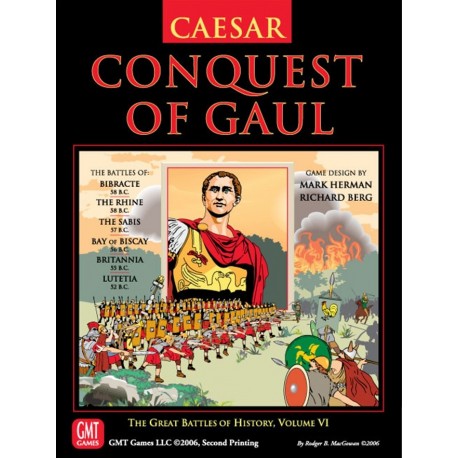 Wargame of the GBOH series dealing with the conquest of Gaul by Cesar.

In 58 BC, Gaius Julius Caesar was appointed by the Roman Senate as proconsul for Gaul, for which he was given 4 legions. the ambitious Caesar, a military genious, had little idea of how lucky he was going to be -- as he was in usually everything he did -- because, within a short space of a few years, after coming to the rescue of the Gauls against incursions from Germanic tribes to the east, Caesar himself decided to bring the rest of the barbarian tribes under the domain of Republican Rome...and, at the same time, increase his visibility among the Roman people.
From a military point of view it was an immense achievement, one that fueled Roman imperialist feelings like no other war.
For the Gauls it meant subjugation. For the gamer, it means six battles of Pure Excitement :