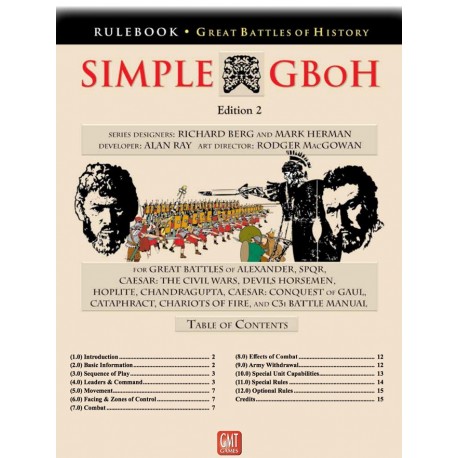 The ZOC Rules were modified to address some odd looking situations that can arise during play, and to simplify the rules language. ZOC effects have been aligned with the standard game. Shock is now mandatory for active units that have enemy units in their ZOC; being in an enemy ZOC is not relevant.
An In Command unit may leave a hex adjacent to an enemy unit, but cannot move adjacent to an enemy unit during that Player Turn. Out of Command units are pinned to the hex they are in if adjacent to enemy unit but may change facing.
Two-hex units may Reverse Face in reaction to enemy movement in a similar manner to single-hex units, albeit with a higher cost of failure.
Offensive Javelin Missile Fire is limited to H&R Tactics and defensive (reaction) Javelin Missile Fire as Return Fire against H&R Javelin fire only.
Elephant Screens are now active in Reaction Fire.
The Elephant Rampage DR generated by a Missile hit has been removed; Elephant units incur 2 Hits instead (as do Chariot units). Elephants do not Retreat from Shock, but instead incur 2 Hits.
Weapons System Matrix reworked to better reflect the results from the standard game tables. Certain types (Archers, etc.) are no longer Shock capable.
Shock Resolution & Results: Hits and Moving DRMs have been eliminated along with the Reduction result.
Column Movement rules brought up to date.

SPQR, Alexander (including the two new scenarios), and Caesar/Gaul scenarios modified to match the current editions of those volumes.
Most scenarios have modifications to the Formation charts, Seizure Ratings, and/or special rules.
Summary page with modifications to Simple GBoH scenarios published in other volumes/modules and C3i

Simple GBoH is designed for players who want a faster, less die-roll-heavy version of the GBoH system, while retaining as much of the historical flavor and insight of the original rules. These rules and its companion playbook cover all the battles published in Deluxe Great Battles of Alexander, SPQR, Caesar: The Civil Wars, Caesar: Conquest of Gaul, Cataphract, and all their related modules. The battles presented in C3i are published in the Simple GBoH Battle Manual.

IMPORTANT NOTE: This rules book is self-contained; you do not need the original GBoH rulebooks to play this version...although the former does contain interesting Design and Historical notes. Most of the rules and mechanics which are part and parcel of all previous GBoH series land battles have either been changed or are not here anymore.