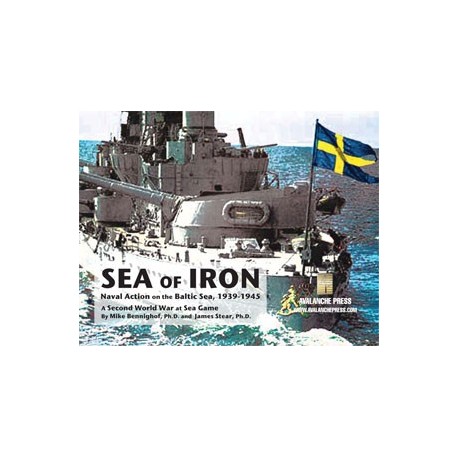 Sea of Iron is a complete Second World War at Sea boxed game based on actions on the Baltic Sea between 1939 and 1945.

World War II began when the German battleship Schleswig-Holstein opened fire in the early morning hours of 1 September 1939. The war started on the Baltic Sea, and some of its very last actions took place there as well.

Sea of Iron is a complete Second World War at Sea boxed game based on actions on the Baltic Sea between 1939 and 1945. Thirty scenarios track the operations and battles that took place or could have taken place between the fleets and air forces of Germany, Poland, Lithuania, Latvia, Estonia, the Soviet Union, Finland and Sweden. In addition to their complete Baltic Sea orders of battle, the Soviets, Swedes and Finns all have additional ships they planned or began to construct but did not complete. And of course we have scenarios for their use.

There are 140 “long” ship pieces and 420 standard-sized square ones representing smaller warships, transports, aircraft (many, many aircraft) and a handful of markers. This is a big game, at least in terms of pieces. The map is not so big: the Baltic Sea is pretty small and almost completely land-locked, with ports and airfields in abundance. Aircraft are very potent in this theater, and ships have very little room to hide. The map by Guy Riessen shows the full Baltic on a single 11x17-inch panel.

The scenarios cover all of the action from the Polish “Operation Peking” in which three destroyers escaped to England just before the war began, to the planned Swedish invasion of German-held Denmark in May 1945.