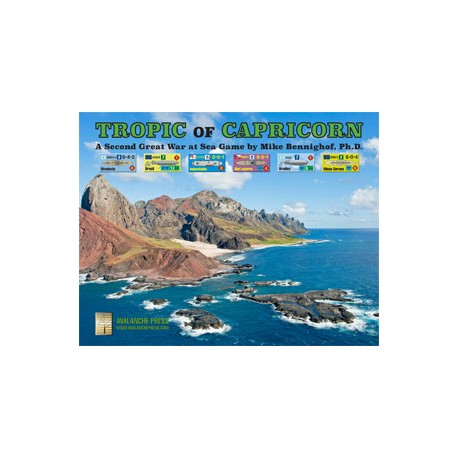 Tropic of Capricorn is a complete boxed game in the Second World War at Sea series, an alternate history setting.

In late 1916, Woodrow Wilson attempted to bring an end to the First World War. He failed.

In another reality, he succeeded. The great empires survived, yet the peace proved flawed and world-wide war returned in 1940. That war is the background of our Second Great War at Sea series.

Tropic of Capricorn is a complete boxed game in the Second World War at Sea series, bringing the APL's alternative-history Second Great War story arc to the shores of South America. Argentina, assisted by Chile and Britain, faces off against Brazil in a naval war in the South Atlantic.

Tropic of Capricorn includes one 22x34-inch operational map, the same “Rio de Janeiro” map included in our old Cone of Fire game (which will soon go permanently out of print). It covers the most important politically- and economically-important stretches of the Argentine and Brazilian coastlines including Buenos Aires and Rio de Janeiro.

Tropic of Capricorn also has 180 new silky-smooth and die-cut playing pieces: 100 “long” ship pieces and 80 standard-sized ones representing small warships and aircraft as well as task force and flight markers. These represent the fleets of Argentina, Brazil, Britain and Chile, though not exactly as they appeared in our reality.

Each of these fleets has undergone the expansion and reconstruction allowed by strong economic growth and relative political stability - without a German economic collapse to fuel it, the Great Depression is no more than a world-wide recession. Political and especially economic ties have aligned the Latin powers with their European partners: Argentina with Italy, Chile with Britain, and Brazil with the Central Powers of Imperial Germany and Austria-Hungary.

Tropic of Capricorn is one of the first two new games to includes the Second Edition rules for Second World War at Sea: they’re even easier to play with, with more options plus full-color play aids.