Miracle on the Marne 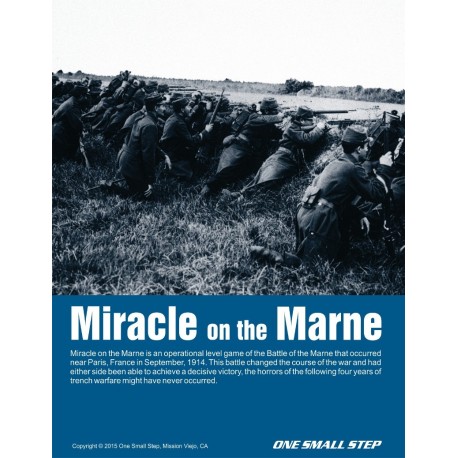 The battles of World War I completely and forever redefined warfare in the western world. They marked the end of the older tradition and the beginning of the age of total war, and a century of conflict.

More info about Miracle on the Marne

Miracle on the Marne is an operational level game of the Battle of the Marne that occurred near Paris, France in September, 1914. This battle changed the course of the war and had either side been able to achieve a decisive victory, the horrors of the following four years of trench warfare might have never occurred. In the game, one player or team of players, will control the Allies (France and Britain), while the opposing player or team will control the Central Powers (Germany).

A. Mutual Mode Alteration. Both players may change the mode of any HQ they choose, thereby altering the mode of subordinate units as well. This alteration is done by replacing the HQ unit currently on the map with another of the same designation, but with the new mode. HQ units are placed face down. Mode changing is done simultaneously.

2. Bombardment Phase: The phasing player may now bombard enemy units with his artillery, resolving all Bombardment Combat on the Bombardment Table.

3. Combat Phase: The phasing player may now attack adjacent enemy units. All combat is resolved using the Combat Results Table. Complete all of the following segments for each attacked hex before moving on to the nest attack:

a. Attacker Declaration Segment: The phasing player must identify all his units that will participate in this attack.

b. Defense Fire Segment: The non-phasing player must declare and resolve all Defense Fire against the declared attackers.

E. Supply Determination. Both players simultaneously determine if any units are Out of Supply.