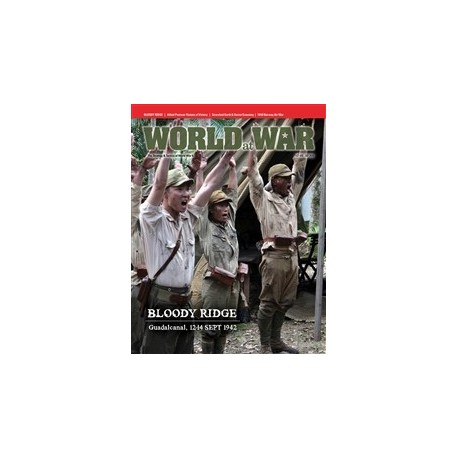 in this World at War magazine you will find historical articles and the wargame Bloody Ridge: Decision on Guadalcanal with die cut counters.

Bloody Ridge: Decision on Guadalcanal, 13 September 1942 (BR for short) is a purpose-designed solitaire wargame of low complexity simulating the climactic Japanese night attack of that date. The attacked was aimed at nothing less than the capture of Henderson Field and the annihilation of the entire US ground force on the island.

You are on the offensive, commanding the Japanese attack force that’s attempting to break through the US Marine defense. The rules system, with your help in handling the mechanics of the process, runs the Marine defense. You win by exiting one or more Japanese units off the north edge of the map, or by eliminating the 1st Marine Division headquarters.

Each game turn of BR is equal to about two hours of “real time.” Each hexagon represents 125 yards from side to opposite side. Each unit-counter represents a fire-team, squad, platoon, company or some other similarly sized ad hoc grouping of infantry and/or support weapons. The effect of the historically important off-map USMC field artillery is covered by the bombardment rules (see section 8.0).

Bloody Ridge: analysis of the desperate Japanese night attack on Guadalcanal, as they sought to break through the US perimeter in order to seize Henderson Field.