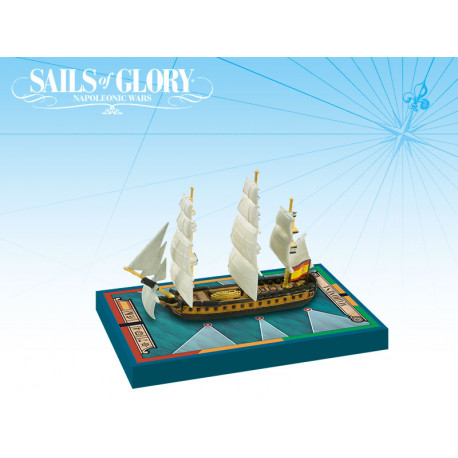 The Santa Monica – aka Mahonesa – was the first of a series of 6 frigates of 34 guns, built in the Minorcan port of Mahón, and had as her first service the transport of troops of Mallorca. This ship performed various services along the Mediterranean sea, and took part to French Revolutionary Wars until she was captured by the HMS Terpsichore on October 13, 1796 on the Cape of Gata, after a fight of three hours with 21 dead crewmen.

This ship pack can also be used to represent the Spanish Mahonesa class frigate “Ninfa 1795”.

Each Sails of Glory™ Ship Pack is a ready-to-play model, painted and assembled, 100% compatible with any other Sails of Glory game product.

In each pack you will find all you need to play with the ship: a special base with gaming stats, a ship log and a specific deck of maneuver cards. The ship base, ship card and ship log are printed on two sides – The game data of a second ship is printed on the back.