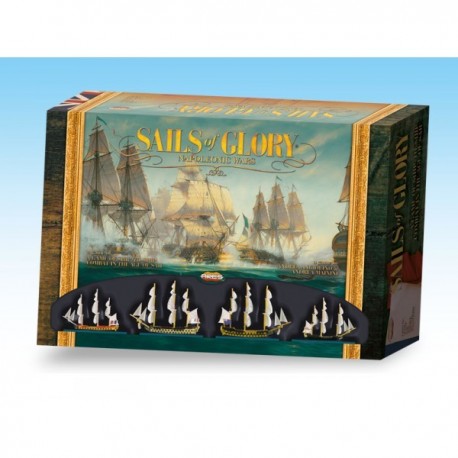 This Starter Set is a complete game for 2-4 players, and also the entry point to a game system that allows players to recreate the epic naval battles of the of the “Age of Sail”.

In Sails of Glory®you will sail and fight with massive ships-of-the-line or swift frigates, in an age where the armies and fleets of the French Emperor Napoleon I battled across the seas, as well as on the fields of Europe, and the powerful Royal Navy of the British Empire clashed against the French from the Atlantic Ocean to the Mediterranean Sea, in dramatic naval battles, such as Trafalgar and the Battle of the Nile.

Fast playing and easy-to-learn, Sails of Glory uses pre-painted and assembled ship miniatures and an innovative movement mechanic, inspired by the acclaimed system used in our Wings of Glory® game.

Four ships, two French and two British, are included, each ship complemented by a specific maneuver deck and ship log.

Also included is a full color rulebook, counters, and accessories, to start playing out of the box in mere minutes.