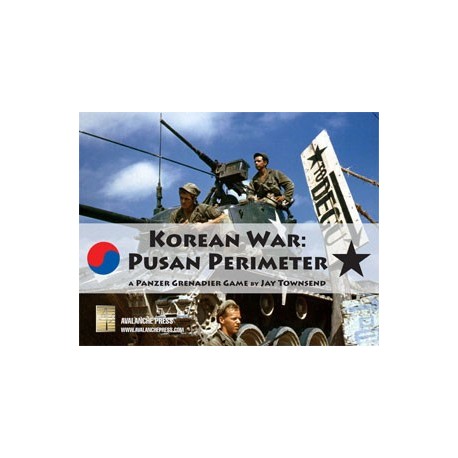 Pusan Perimeter is a complete boxed game in the Panzer Grenadier series based on these fearsome battles.

On June 25th, 1950, North Korean forces surged across the 38th Parallel into South Korea, starting what would become the Korean War. Within days the South Korean capital of Seoul had fallen and the Republic of Korea (ROK) Army had been routed. Remnants retreated southward and finally gathered around the port city of Pusan, where American troops had begun to arrive under the authority of the United Nations. Here on the Pusan Perimeter the U.N. forces would make their final stand.

The North Koreans have a wide array of Soviet-made weapons, spearheading their attack with T-34/85 tanks. The South Koreans are fairly lightly equipped, while their American allies bring the tanks and guns that won the Second World War: M26 Pershings, M24 Chaffees and a blistering helping of air power.

The game includes four semi-rigid mapboards, with art by Guy Riessen. The maps are fully compatible with all others in the Panzer Grenadier series (and those from Panzer Grenadier (Modern) and Infantry Attacks, too). Plus 517 playing pieces: smooth, scorchless, sootless laser-cut piece, a joy just to hold in your hands. And 48 scenarios.