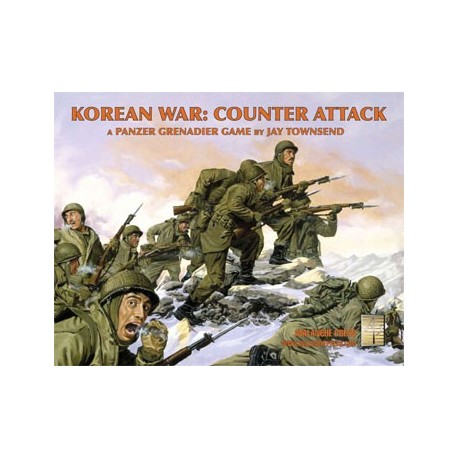 Counter Attack is a complete boxed game in the Panzer Grenadier series.

Driven back into the Pusan Perimeter, American and South Korean forces – soon joined by British, Turkish and other United Nations contingents – held the line and in the fall of 1950, launched a powerful offensive against the North Koreans. With strong tank-led forces surging northward and other units landing by sea at Inchon, the United Nations rapidly turned their victory into a North Korean rout.

Counter Attack is a complete boxed game in the Panzer Grenadier series based on these fearsome battles. You do not need any other game to play all of its 63 scenarios. Design is by Jay Townsend.

The North Koreans have a wide array of Soviet-made weapons, spearheading their attack with T-34/85 tanks. The South Koreans are fairly lightly equipped, while their American allies bring the tanks and guns that won the Second World War: M26 Pershings, M24 Chaffees and a blistering helping of air power.
New forces arrive to help out: the U.S. Marine Corps deploys some real armor this time: the the castoffs of the Pacific War, but M26 Pershings of their own. There's also a helicopter (games with helicopters are always better) and the British are here. too.

The game includes four semi-rigid mapboards, with art by Guy Riessen. The maps are fully compatible with all others in the Panzer Grenadier series (and those from Panzer Grenadier (Modern) and Infantry Attacks, too). Plus 517 playing pieces: silky-smooth, die-cut pieces without that "bathtub effect" caused by die-strike damage to the flip side. And 63 (sixty-three!) scenarios. You can play those scenarios individually, or in one of the "battle games" that link them together for an intense campaign experience.