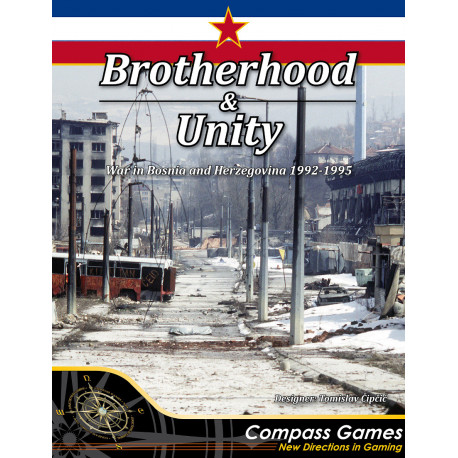 Brotherhood & Unity is a 2-3 player card driven wargame which depicts the war in Bosnia and Herzegovina from 1992-1995 ("Bosnian War").

Brotherhood & Unity is a 2-3 player card driven wargame which depicts the war in Bosnia and Herzegovina from 1992-1995 ("Bosnian War"). The game shows all of the major events: from the siege of Sarajevo (shown in separate, detailed map), to the ferocious battles for the Posavina corridore, and desperate defence of the Bosniak enclaves. Main features are: Point-To-Point movement system, play driven by Strategy Cards, quick combat resolution (no CRT),  streamlined rules and fast gameplay. Interaction between warring sides (Bosniaks, Serbs and Croats) creates an intensive and exciting gameplay experience.

Player's military strength fluctuates based on historical facts, with Serbs starting superior in all aspects, and Bosniaks struggling to organize an effective fighting formation. Military units represent Brigades - standard military formations of the time, ranging from 1500-2000 soldiers. They have different combat and movement values (based on historical data), which forces players to use different tactics for different opponents. Majority of these units are non-motorized infantry formations (moving only several spaces per round), but with the use of special offensive cards players can increase their mobility and surprise the opponents.

The game simulates three distinct sides in the war: Bosniaks, Serbs and Croats - with no clear border separating them. That provides an interesting set of choices to players: to attack or to fortify, whom to ally with, and when to change sides. That leads to many turnarounds and pragmatical alliances with former enemies - as was historically the case.