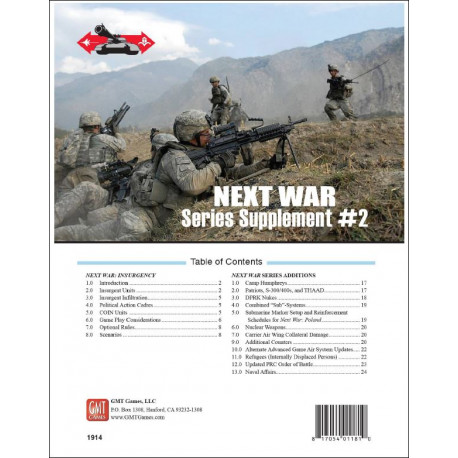 This expansion for the Next War series contains advanced and optional rules.

More info about Next War : Supplement 2

This is, by far, the bulk of this Supplement. These rules will allow players to conduct an insurgency against the player occupying their country using new rules. Alternatively, they will allow an occupier to attempt to crush the insurgency in the country they've supposedly just defeated. A new Sequence of Play is provided which simplifies overall game play. Elements of both the Standard and Advanced Rules are used. For instance, air power is handled with a version of the Standard Game Air Points. The COIN player will get to have his HQs and SOF, but he'll also have to maintain supply lines. These rules will introduce new concepts such as unknown units (Direct Action Cadres and Political Action Cadres for the insurgent player) as well as Breakdown Battalions for the COIN player plus several other rules tweaks so that players can fight an insurgency/counter-insurgency campaign. There will be at least four scenarios in the final product*:

The United States is building a mega base in South Korea at Camp Humphrey's. These rules alter the way US reinforcements enter the peninsula and relieve the burden on Busan. It also offers opportunities for the DPRK player to interfere with those reinforcements.

This provides new, expanded rules for the use of these systems as well as providing all new updated counters. Players will be able to attempt to defend against Air Strikes as well as shoot down incoming Cruise Missiles (Patriot, S-300/S-400) or Ballistic Missiles (THAAD).

The DPRK is deeply intent on weaponizing its missiles. These rules provide for that option, along with an "Assured Destruction" mechanism by which the DPRK can be incinerated for using them.

The above three additions are meant to be used together, but players are free to pick and choose amongst them.

Straight from a Next War player comes an excellent idea on combining the Submarine Marker rules from Supplement #1 with the Series ASW/Submarine Threat Level rules. This provides a framework for using the rules in that way.

Used either in conjunction with the combined rules above or stand-alone with the Submarine Marker rules from the Supplement, this will contain new counters and rules for applying those rules to the situation in Next War: Poland.