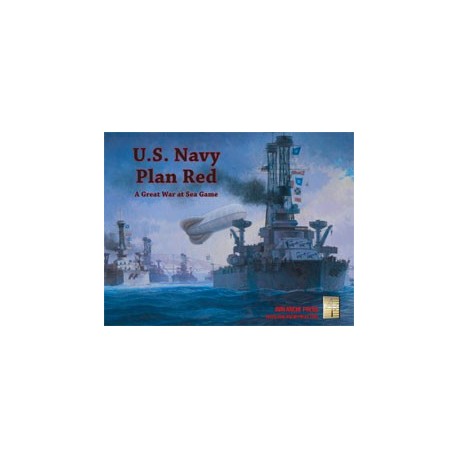 Member of the The Great War at Sea family, US Navy Plan Red stages a hypothetical naval war between US and Britain. Based on actual US navy plans. Players plot their task forces moves on the strategic map and when contact is made combat is fought on the tactical map.

"We would as soon fight the British as the Germans."

Rivalry between the U.S. and Great Britain didn’t end with the War of 1812. Some naval officers from each country saw the other as a potential future threat, while others dreamed of close alliance between the English-speaking powers.

By the time of the First World War, American naval officers had clustered into two camps: those around William Shepherd Benson, the chief of naval operations, disliked the British and saw them as their navy’s next enemy. Others followed the lead of William Sims, who admired the Royal Navy and saw Britain as a natural ally. During the war these camps polarized: Some Americans had very positive experiences serving alongside the British, while others burned at the arrogant attitude of some in the Royal Navy.

When the United States formalized its war plans in the early 20th Century, potential foes were coded by color. Japan became Orange, Germany was Black, and Britain was noted as Red. British dominions also drew shades of Red: Canada was Crimson, New Zealand was Garnet, India was Ruby and Australia was Scarlet.

The Red war plan saw a pair of primary goals: the conquest of Canada, and trade warfare. The first would be primarily the Army’s job. The Navy would disrupt British trade while protecting American merchant shipping. Though the Americans respected British fighting power, the plans themselves reveal great confidence in the ability of American shipyards to outstrip British production and in the individual superiority of American sailors. There is also a powerful undercurrent of anti-Japanese hostility in the text of the plans. In some of the more hysterical passages, the British are seen practically as racial traitors for allying themselves with the Japanese. One pretext for war given several times in documents from 1919 and 1920 is an intelligence report claiming that the Royal Navy was on the verge of transferring eight modern dreadnoughts to Japan.

American plans to build powerful new dreadnoughts during the course of the First World War caused great hostility between the two navies. The British pointed out the great need for destroyers and merchant ships, while American resources went instead for new battleships that could not possibly see action before the war ended. American naval leaders saw this pressure as an attempt to maintain British naval supremacy. Some in the Royal Navy believed the new warships could only be meant as a challenge, and wondered if they had only beaten the Germans to lose control of the seas after all. The Americans, they feared, were arming for the next war even while the last was still under way.

War Plan Red, and its attached War Plan Crimson, gave the U.S. Navy the task of invading Nova Scotia and disrupting communications between Britain and Canada. This is usually the task of the American player in the game. The Royal Navy foresaw these moves, and hoped to damage the Americans with commerce raiders based on Bermuda.

The game’s map covers the Eastern Seaboard, from the Labrador coast in the north to Virginia Beach in the south. In addition to the British and American fleets, Plan Red the game also includes Canada’s three proposed dreadnoughts.

There are three examples of the original design of the Lexington-class battle cruiser with 14-inch guns, and five smokestacks. We’ve also got the American 1914 design of a fast armored cruiser with eight 10-inch guns, which would have been built for commerce raiding.

On the British side, we have the huge N3 design battleships, with nine 18-inch guns, and the similar G3 battle cruiser with nine 16-inch guns. The Royal Navy also gets its proposed F-class cruiser, and the three R-class battleships which were ordered but later cancelled.