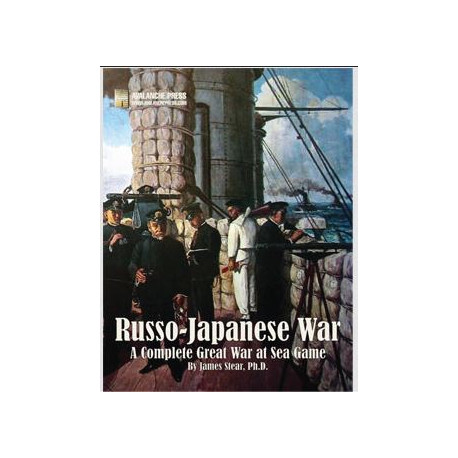 Russo-Japanese War is based on the naval side of the Russo-Japanese War. The game covers all the major operations of the conflict, plus the minor ones, plus those that could have taken place but did not. The Japanese need control of the sea to support their invasions of first Korea and then Manchuria; the Russians must interdict this traffic.

There is a complete lack of airpower. This game will be decided by battleships. There are no giant dreadnoughts; while some battleships are better than others, all of them have pretty similar capabilities. There is no single ship that’s going to sink squadrons of the enemy, and no mass of airplanes is going to show up and rain bombs and torpedoes on the fleet. The battleships (and sometimes the armored cruisers) are going to have to line up and fight it out. This is what naval wargaming is supposed to be!

Inside the box, you’ll find a set of laser-cut playing pieces depicting all the ships that took part in the war, and many that could have but did not. Both the Russians and the Japanese can deploy the former Chilean battleships that each tried to buy; Japan also can get early delivery of her newest battleships. There’s also a Russian submarine and a Japanese submarine (something missing from the old game).

The pieces themselves mark a radical departure for Avalanche Press: they are indeed laser-cut, and they are extremely thick. They're also printed via a new process that cuts the core material first, and only afterwards lays down the ink layer. The result is a playing piece that has no scorching from the laser and very little residue (the core material doesn't burn readily), yet is still very smooth to the touch. The pieces have a feel of having been painted; it's a very cool effect.

Developer Jim Stear has given this game a radical overhaul; it’s not really the same game anymore. The ship pieces have been revised to bring them in line with other Great War at Sea games (no more 1+ speed, for those keeping score) and the rules for pre-dreadnought combat now match up with Jim’s fine work with Remember the Maine.

And then there are the scenarios. By the beard of Poseidon, there are scenarios: 50 (fifty) of them, against just 19 in the old game. Every scenario is playable solely with components found in the box, and every ship in the game sees action in at least one scenario. They cover all the major actions, all the actions that could have taken place but did not, and most of the small actions too (using the innovative rules for small warship combat that Jim developed for Remember the Maine).

The map covers a slightly larger area than that in the old game – all of the Japanese islands plus Korea, southern Sakhalin, Korea, north China and the Russian Maritime Province. Russian raiders on occasion can and will sail around Japan, but most of the hot action takes place in two semi-enclosed seas: the Yellow Sea between China, Korea and Japan and the Sea of Japan between Japan, Korea and the Russian Maritime Province. For those comparing, there's more sea room now on the "opposite" side of Japan to allow brilliant manuevers.