Airborne in your Pocket! 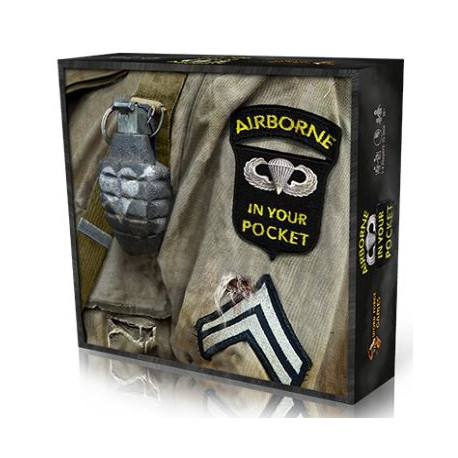 Airborne in your Pocket! is a cooperative subtacti wargame.

More info about Airborne in your Pocket!

The night before June 6th, 1944, more than ten thousand Allied paratroopers were dropped into enemy territory to prepare the Normandy landings – but the troop-carrying planes were blasted by German anti-aircraft fire, scattering their airborne troops everywhere but where they were supposed to be.

You are one of these paratroopers. And as luck turns out, the winds have blown you directly where you are needed the most! As you were descending, you discovered a terrible sight: the Germans have installed two 24.0 cm Guns in a hidden bunker. Those cannons are set to fire at the beaches of Normandy. You alone can stop them from killing the Allied troops! All you need is some explosives...

In Airborne In Your Pocket, players explore their surroundings by placing Location tiles and resolving Event cards every turn. They must find the Ammo Dump to obtain some explosives and enter the bunker to sabotage its guns. Of course, there are German soldiers everywhere, so players will have to hide or fight their way through.

AIYP can be as simple (Basic Game) or as involved (Scenarios & Campaigns) as the player wishes. The Advanced Game and Scenarios allow you to play as American, British, Canadian and French soldiers. The game comes in four different sets, and each set has enough components for one player. To add more players, add more sets (up to four can play).