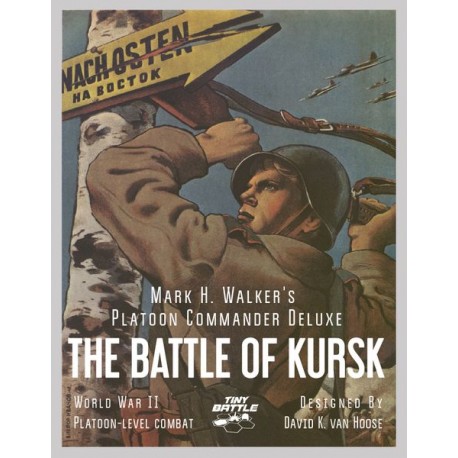 PCD:K uses version 2 of the Platoon Commander rules, which are identical to the V1.5 rules released with the latest Tiny Battle Publishing Platoon Commander game, Poland Strikes, with the exception of enhanced artillery and new air strike routines.

With all the tactical games on the market, what makes Platoon Commander Deluxe: Kursk different?

Clutterless counters. PCD:K uses color to determine a weapon's range. For example, an Armor Piercing factor printed on gold indicates that the weapon can fire normally at a target up to four hexes away.
Unique phasing. Players alternate attacking in the Fire Phase, but move all their units at once during the Movement Phase.
Flanking Friendly Close Assault Phase. Units do not enter the hex of the Close Assault target, but rather attack from adjacent hexes. This allows the attacker to not only amass the overwhelming odds needed to take that key position, but also attack from multiple directions, which provide a flanking bonus. Additionally, alternating attacks in the Close Assault phase allow defenders to conduct true spoiling attacks.
Ranged combat results are based not only an the target's armor factor and terrain, which determine the column on which the attack is executed, but also the target unit's morale which determines how many hits affected the target.
Artillery is card driven. Neither player knows the other's artillery capability by glancing at a scenario card. Artillery barrages are determined by Action Cards.
Action Cards. PCD:K is not card driven, but rather card assisted. The Action Cards provide artillery, rally units, provide combat bonuses, and even unexpected Opportunity Fire shots.
Focus and Aid Markers. These markers allow players to influence the battle much as their real life counterparts would. Players may choose to focus on a specific area, providing combat bonuses, or provide additional aid to those disrupted by fire.

It’s a system that grognards and newbies alike can enjoy. The counters are large, easy to read, and beautifully illustrated.