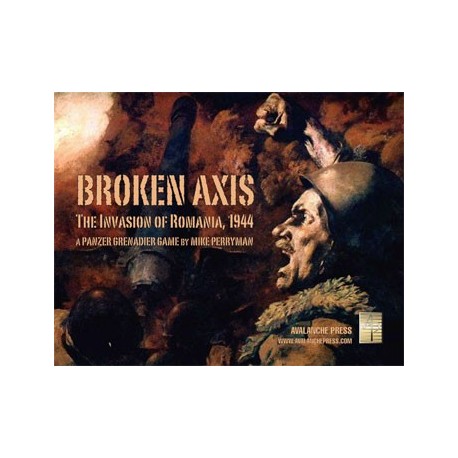 Broken Axis is a complete boxed game in the Panzer Grenadier series based on the soviet invasion of Rumania.

Having driven the Hitlerite invaders out of Soviet Ukraine, the Red Army turned its sights on Axis-allied Romania in the spring of 1944. Powerful mechanized armies were met by German and Romanian forces along carefully-prepared defensive lines, which initially held off the attacks. But by late summer the Red Army had broken through, and Romania left the Axis to join the Allies in the liberation of Eastern Europe.

Broken Axis is a complete boxed game in the Panzer Grenadier series based on these battles. You do not need any other game to play any of its 50 scenarios. Design is by Mike Perryman, creator of our Kursk: Burning Tigers game. You can play those scenarios individually, or in one of five "battle games" that link them together for an intense campaign experience.

The Germans bring strong armored forces to the party, including Tiger and Panther tanks, Panzer IV medium tanks and the usual array of assault guns. At least that's what they have when they show up instead of leaving the fighting to the Romanians. The Romanian Army has been rebuilt from its 1941 and 1942 disasters, with German-made tanks and modern Romanian-made anti-tank guns. The Germans do provide the elite Grossdeutschland Division, and its epic stand at Tirgu Frumos is a centerpiece of the game’s scenario set.

The Red Army is powerful: the new JS-2 heavy tanks are in action, along with the first examples of the T34/85. These are the first large-scale battles fought outside the pre-war borders of the Soviet Union, and the Red Army is eager to take the fight to the Romanian “mush eaters.”

The game includes four semi-rigid mapboards, with art by Guy Riessen. The maps are fully compatible with all others in the Panzer Grenadier series (and those from Panzer Grenadier (Modern) and Infantry Attacks, too). Plus 517 playing pieces: silky-smooth and die-cut pieces, a joy just to hold in your hands. And 50 scenarios with five battle games.