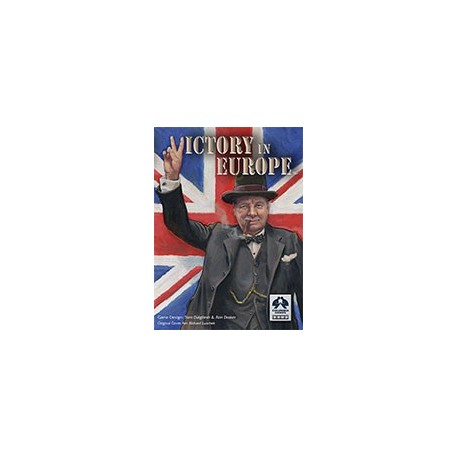 VICTORY IN EUROPE: a strategic block wargame of World War II, for 2 or 3 players. Plays in 4-6 hours on an oval map of Europe.

More info about Victory in Europe

Victory in Europe puts you in control of Axis, Allied, or Soviet strategy in WWII.

Fight in the air, fight at sea, and fight on land with more than 180 hardwood blocks representing the forces of every nation involved.

The game is driven by 108 full color cards that control initiative, movement, & combat.

V.E. Map design: The map is a single piece that folds down into a 8.5x11 size. It has 9 panels. It is the same map size as in Bobby Lee, though the corners are rounded to give the final shape.

Victory in Europe is a game covering the Second World War in Europe from 1939 to 1945. One player commands the Axis powers, the other the Allies.

Players maneuver their armies on an area map of Europe, fighting for control of key victory cities and critical resources. Air, naval, and ground units are all involved. Battles are fought when enemy units clash in the same area.

The early war 1939-1941 is driven by the Axis, but gradually the Allies become stronger and usually take the initiative by 1943. However, the game need not unfold exactly like history.

The French may survive 1940, the Germans may invade Britain. Germany may attack Russia in June 1941, or attack earlier, or later, or not at all. The Soviets may attack Germany first which was likely their plan.

The USA might enter the war in 1942, perhaps earlier, perhaps later. All of these decisions are made by the players, influenced by Diplomatic events that are controlled by game events. Invading neutral countries such as Norway or Belgium has consequences.

Aviss about Victory in Europe