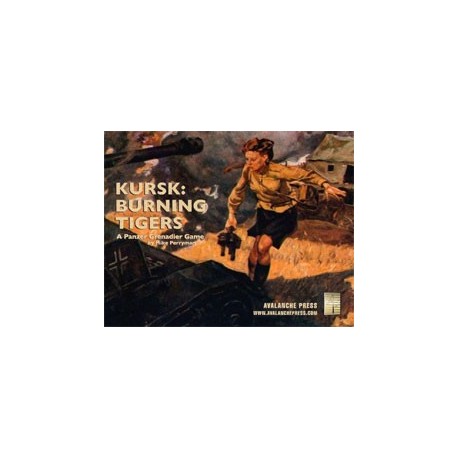 While the SS assault the Kursk salient from the south, German plans had the Ninth Army hurling three panzer corps against the bulge's northern flank. With weeks to prepare, the Soviet 13th Army had dug in with multiple lines of anti-tank guns, and once the Germans broke through they had to face the Second Tank Army. Kursk: Burning Tigers is a stand-alone game in the Panzer Grenadier series: You do not need any other game in the series to play any of the 40 scenarios.

In this game the German Army wields new weapons for its long-planned offensive. Panther tanks, Ferdinand tank destroyers, Goliath explosive tanks and more are in the German arsenal. The Soviets counter with masses of the excellent T-34 medium tank, plus Lend-Lease Churchill tanks, T-70 light tanks and much more.

There are four semi-rigid mapboards, just like those found in August 1914 or 1940: The Fall of France. Plus 517 scorchless and sootless playing pieces. And 40 scenarios.

This game and its companion, South Flank are exactly the games for which the Panzer Grenadier series was intended. These are the ultimate tank battles that every Panzer Grenadier player will want to fight.