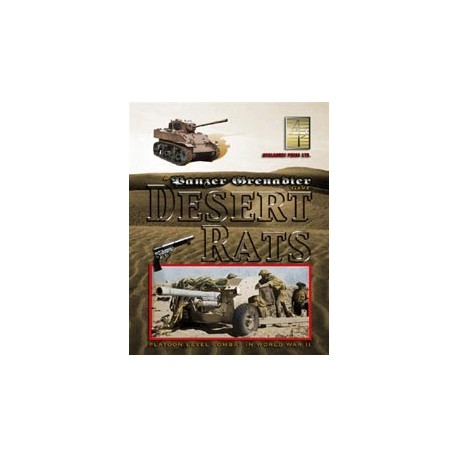 By the autumn of 1941, Axis and Allied troops had fought for control of the North African desert for over a year with no decisive results. Both sides poured in fresh divisions and hundreds of tanks, leading to the massive tank battles of Operation Crusader and Gazala.

There are fifty separate scenarios, or game situations, based on these actions which include some of the largest tank battles portrayed in the Panzer Grenadier series.

There are two large maps showing typical terrain found in the deserts of Egypt and Libya, but based on actual locations (Sidi Rezegh and Bir el Gubi). The different shades of desert terrain represent hills and ridges in some scenarios, and more-or-less level ground in others, allowing the same maps to be used in many different ways.

The playing pieces represent the troops, tanks and weapons of several armies: British, Indian, New Zealand, Italian, Italian Colonial, Italian Navy and German. There are vast numbers of tanks, with the British bringing their Matilda, Crusader and Valentine tanks as well as the American-built Grant and Stuart. German tank strength lies in their Panzerkampfwagen IIIJ with its long-barreled 50m gun, as well as the very powerful "Mark IV Special" with a long 75mm gun. Italian vehicles are much less impressive; though their crews are valiant the slow and weak M13/40 medium tank is no match for Allied tanks.

If Italian tanks are poor, their Bersaglieri infantry is outstanding. Italian Colonial infantry is usually not very good, but the bande irregulars move quickly through broken terrain and have special abilities in close combat. The Colonials also include cavalry — and horsed units make any game that much better. New Zealand troops are very tough as well, and include the fearsome Maori Battalion. The Indian Army's long-service professionals are very good, and they include the famous Gurkha battalions.

There are 50 separate scenarios, or game situations, each representing a different battle. They range from small infantry encounters to gigantic swirling tank battles. All take place in Libya, Egypt and Italian East Africa during late 1941 and early 1942. There are well known clashes like the tank battles at Sidi Rezegh or on the Trigh Capuzzo and the epic stand of the Italian "Young Fascists" at Bir el Gubi. There are also less-well-known battles like the Maori attack on Sollum or the Italian conquest of Somaliland.