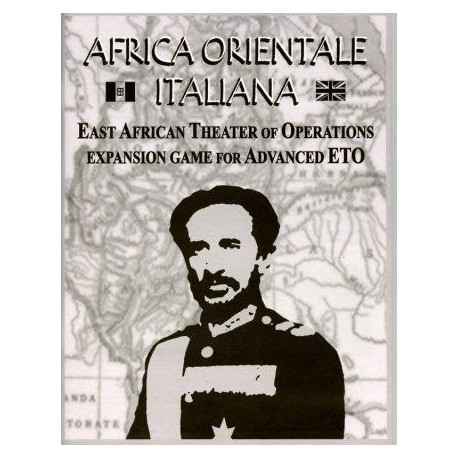 The first game to cover the entire East African Theater of Operations during World War II, Africa Orientale Italiana (Italian East Africa or AOI) is designed to expand Advanced European Theater of Operations into Africa and the Middle East, as well as presage the general war in Europe, beginning with the Italian invasion of Ethiopia in 1935, and continuing into the Second World War as British and Italian forces fight for control of the vital Red Sea region.

AOI also includes an entire map of India and the Indian Ocean that will link to Advanced Pacific Theater of Operations, thus being the only corps-level World War II game ever published that connects every front of the war via uninterrupted hexagonal maps. Further, a Global Administrative Map is also included that allows you to manage off-map movement.

AOI also includes a full counter sheet (280 units) that features the Ethiopian order-of-battle, all the Italian and British forces that operated in East Africa, as well as a complete AETO upgrade that includes 40 new types of aircraft, such as the Me-163 Comet, the Mig-3, the PBY Catalina, and the Gloster Meteor. AOI also includes new rules specifically for AETO, such as: combat veterans, naval night movement, mountain pass movement, fire bombing, German Flak, Manstein and more.

AOI also includes a map of Spain that adds additional Atlantic Ocean sea areas to AETO, and incorporates an entire Spanish Civil War scenario with a complete order-of-battle of Nationalist and Republican land, air and naval units. With AOI, AETO and APTO players can experience all of World War II. AOI has been designed to link with the AETO and APTO maps, or to be set-up alone as a scenario of the Ethiopian campaign.

This is an expansion kit for AETO and requires that game for play.