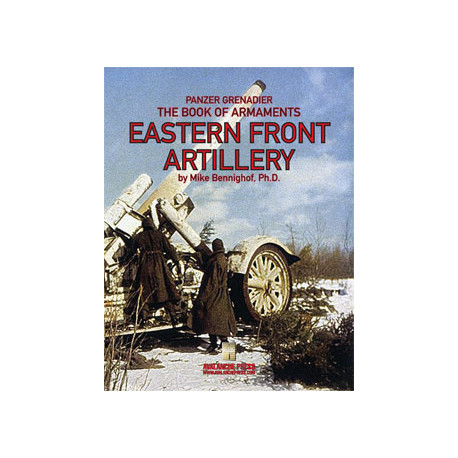 The Book of Armaments is an expansion book with counters for the Panzer Grenadier wargame series.

On the combined-arms battlefield, it’s the armor that slashes through and the infantry that takes and holds ground. But it’s the artillery that destroys, that creates the breakthroughs and crushes attacks before they even begin.

The Book of Armaments is all about artillery in Panzer Grenadier, focused on the Eastern Front games (Fire in the Steppe, South Flank, Burning Tigers, Broken Axis, Gates of Leningrad, The Deluge, Slovakia’s War, Armata Romana) and thus on the Soviet, German and Romanian armies (including related forces like Soviet Guards or German Waffen SS).

It comes with 88 new die-cut and silky-smooth pieces: additional artillery units, plus new units for the heavy and medium batteries of corps- and army-level battalions. There are German 170mm and 210mm guns, Soviet 152mm and 203mm batteries, Romanian 155mm guns and so on. And there are more of the artillery batteries already present in some (though not all) of those games, like the German 105mm howitzer.

In Panzer Grenadier, each off-board artillery increment corresponds to an artillery battery and has the same strength as the battery’s indirect fire rating (so most German increments have a strength of 16 just like the 105mm howitzer). The Book of Armaments includes Artillery Display Cards for each player, and you’ll put your off-board batteries right there on the chart and change their status as you fire them. While it helps keep track of which ones have fired, more important is the coolness factor of playing with artillery batteries on the game board instead of numbers that you write down on paper.

There book also includes some new artillery-centric optional rules to let you do more stuff with the big guns. And of course there’s historical background about the guns and their users.

If you play Panzer Grenadier, you have to have this book: there’s too much fun at stake to pass up.