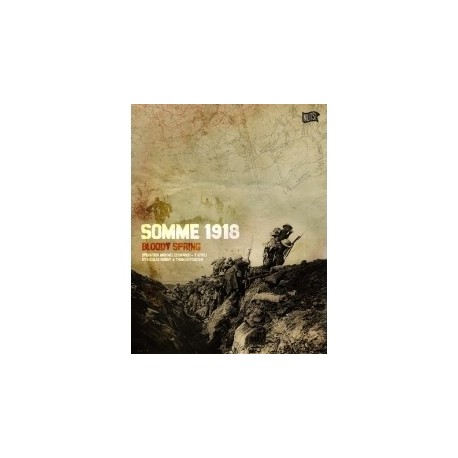 The Great War's indelible image is one of sterile, positional warfare featuring battles whose advances could be counted in meters and losses in the hundreds of thousands. Certainly, this is the case for the war between 1915 and 1917, but it is often forgotten that the years of 1914 and 1918 were marked by a war of movement on a huge scale.<
The highlight of the return to maneuver warfare after years of trench fighting was the Michael Offensive, launched by the Germans on 21 March 1918 at the Somme. Ludendorff was playing his last cards as he knew that time was working against Germany, starved by the blockade and soon to be out-numbered by the arrival of dozens of American divisions.

Each army had found a solution for breaking the deadlock and returning to a war of movement. The Allies used tanks and improved artillery barrage techniques that were as violent as they were sudden, demonstrated at Cambrai in 1917. The Germans had developed new infiltration tactics dependent on elite troops, the famous Stosstruppen, preceded by short but devastating artillery preparations, as devised by Colonel Bruchmuller. These novel tactics, which are still used today by infantry forces, were tested and applied with great success in 1917 against the Russians at Riga and the Italians at Caporetto.
On 21 March 1918, at 0400, the Fifth British Army under Gough was crushed by the artillery fire of 6,200 guns. The bombardment, orchestrated by Bruchmuller, lasted "only" six hours and was intensely violent. The first lines were pulverised along a 70 km front while objectives situated 30 km to the rear were also struck. At 0945, protected by a thick bed of fog, the Stosstruppen infiltrated the ravaged British lines, where their soldiers were still in shock or walled within their dugouts, unable to mount a coherent defense.
In the north near Arras, von Below, still a little unfamiliar with the new tactics, launched the Stosstruppen of his Seventeenth Army in a conventional manner, in compact waves. Allied resistance was stiff and German losses severe. In the center and in the south, the Eighteenth Army of von Hutier, the specialist in Stosstruppen tactics, and the Second Army of von der Marwitz opened a gap a few dozen kilometers wide, and advanced against little opposition.
While the German advance threatened the Allied logistical hub of Amiens, disagreements between Petain (who wanted to withdraw towards Paris to save the city) and Haig (who preferred withdrawal towards the Channel to save his supply links) erupted. As a response to the emergency, Foch was named commander of all Allied forces and, with masterful sang-froid, he methodically engaged the French reserve in order to plug up holes in the front. A counter-attack, led notably by the magnificent Australians at Villers-Bretonneux, coupled with strategic errors on the part of Ludendorff, sealed the fate of the battle. After a month of violent combat, the Germans halted their offensive after an advance of 60 km.
Somme 1918 is the second game in our series that covers all of the offensives on the Western Front in 1918. Somme 1918 is different from Marne 1918 because it covers only one battle, Operation Michael, while Marne 1918 simulated a series of offensives, from Blucher to Friedensturm. The result is a more intense and nerve-wracking game that takes place over eight turns (from the end of March to mid-April), at least half of which are composed of three operational phases. Both players will face difficult challenges. The German player needs to re-create the historic breakthrough and has to put in every effort to reach Amiens. The Allied player has to resist succumbing to panic in the first turns in order to organize an effective defense, and then a counter-attack near the end of the game.
While the basic rules in Somme 1918 are identical to those in Marne 1918 (with the exception of the air rules, which have been completely revised), the advanced rules will be very different. The principal reason is the length of Operation Michael, about fifteen days, which does not give an opportunity for the campaign management rules of Marne 1918 to be used. So, all of the unit management tracks have disappeared and have been replaced by one table that manages the replacement and re-construction of units. Strategic movement has also been greatly simplified and adapted to the tempo of the game.
Somme 1918 will of course be enriched by numerous specific rules, simulating the particularities of this battle. The following list will give you a sneak peek at what is in store:
- The arrival of French reinforcements without their artillery support, allowing a quicker deployment of troops coupled with a reduction in their value.
- Inter-Allied Cooperation: This will be extremely reduced at the beginning of the campaign.
- Evolution of the use of Stoss: The doctrine of using assault troops had been principally introduced by General von Hutier, in Russia and Italy. At the beginning of Operation Michael, the generals commanding the Second and Seventeenth armies used their Stosstruppen in frontal assaults, wasting these elite forces and provoking fury from Ludendorff. A rule thus simulates the evolution of this doctrine.
- The Doullens Conference: At the height of the German offensive, while the French Army under Petain prepared to cut its ties with the British, Haig accepted that he be placed under the command of Foch, finally creating an inter-Allied command. This rule simulates this conference, tied to German conquests. It also plays a part in obtaining victory points. In fact, this rule is really the heart of the game and we think that players will be pleased with the proposed system that will bring together the different parameters of this game. 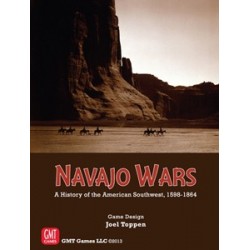 "Navajo Wars" is a solitaire card driven game which places the player into the role of the Diné (Navajo) from the time of the Spanish incursion in 1595 through the time of their subjugation at the hands of an American Army led by Kit Carson in 1864. 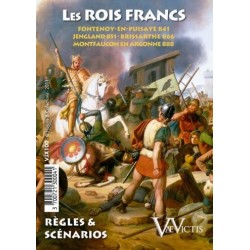 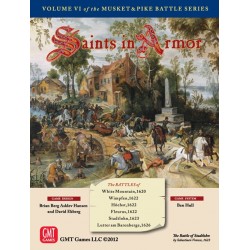