The Lion of Khartoum 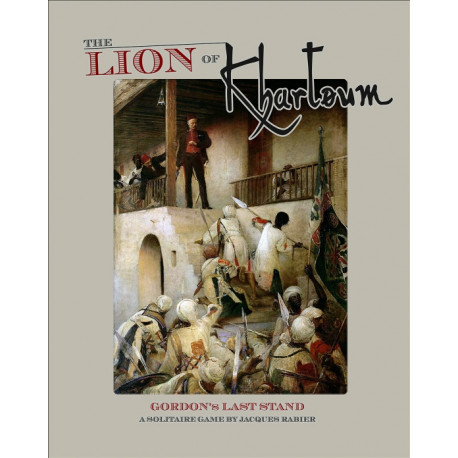 THE LION OF KHARTOUM, Gordon’s Last Stand, designed by Jacques Rabier, is a solitaire, card-driven board game of strategy and resource management about the siege of Khartoum from February 1884 to January 1885. Boxed edition.

More info about The Lion of Khartoum

The Player assumes the role of Major-General Charles “Chinese” Gordon, Governor and self-appointed defender of Khartoum, besieged by the Mahdi's Dervish rebel forces. As the Player, you will have to use your few military units and meager resources skillfully to hold out long enough for British relief forces to come to the rescue…or gloriously die like Gordon himself did.

The game is not intended to be a totally accurate simulation of the siege of Khartoum but is meant to create an interactive narrative and gaming experience in which the Player is required to make crucial decisions to have any chance of protecting the city and its inhabitants from the wrath of the Dervishes. The Player must improve the city’s fortifications, build makeshift Gunboats, mount daring raids and sorties, and tactically respond with military units and leaders to prevent the Mahdi's army from capturing key city defensive locations and, ultimately, the Governor’s Palace. All the while, you must manage to keep up the city’s morale in the face of adverse events and the continuing effects of the siege.

?Are you up to the challenge, Gordon Pasha?

?The game includes the following components: