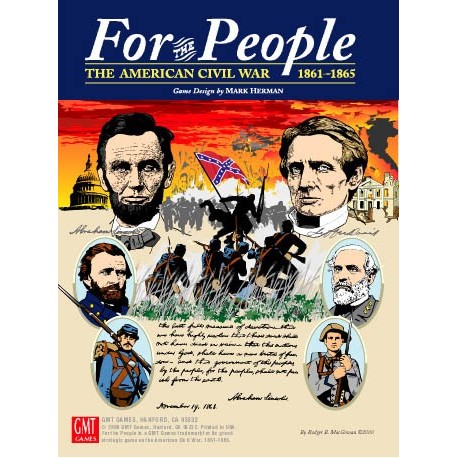 For the People is a grand strategy game of the American Civil War covering the conflict from Texas to Pennsylvania, from the firing on Fort Sumter to the end at Appomattox Court House. mounted map included

The reprint include all changes in the 2006 edition, with any errata cleaned up, as usual. It will also ship with a MOUNTED MAPBOARD.

For the People is a grand strategy game of the American Civil War covering the conflict from Texas to Pennsylvania, from the firing on Fort Sumter to the end at Appomattox Court House. You take the role of either President Lincoln or President Davis and command the armies, promote and relieve generals, conduct amphibious assaults, dispatch cavalry raids, and even battle incompetency and political intrigue among members of your own cabinet.

For the People includes a deck of strategy cards for conducting campaigns and incorporating the many events and personalities of the war. The Confederate player can build ironclads, naval mines (torpedoes), submarines, conduct overseas purchases, and work towards foreign intervention. The Union player can build up his naval blockade, his ironclad fleet, fight draft riots, secure the Border States, and issue the Emancipation Proclamation. Relive the history of this exciting time when our nation was torn asunder.

For the People - French rules

For the people - french cards

For the people - french cards

The Eagle and the Star 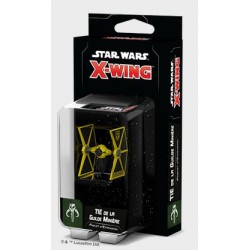 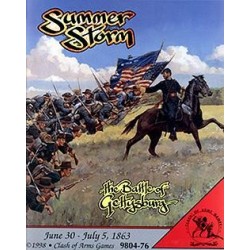 Tired of marching up Cashtown Pike and running into the same old Union cavalry? Tired of Ewell always coming in on the same old flank and scattering the XIth Corps? Does it drive you mad to see, after all the Gettysburg games you've played, Sickles once again get his...