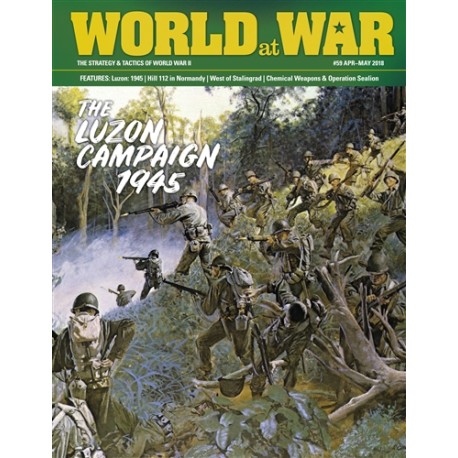 in this World at War magazine you will find historical articles and the solitaire wargame Luzon - The 1945 Campaign of Liberation with die cut counters.

Luzon - The 1945 Campaign of Liberation: The US had complete control of the central Pacific by the middle of 1944. As US commanders determined the next step toward closing in on Japan, eyes turned toward the Philippines, which had been lost to the Japanese early in the war.

The Luzon Campaign, 1945 (LC) is a wargame, purpose-designed for solitaire play, which covers the fighting across the main Philippine island of Luzon early in 1945. The first turn represents one week, each turn after that represents half a month. Each regular hexagon represents 6.75 miles (11 kilometers) from side to opposite side.

You, as the single player, actively commands the invading US forces, while the rules direct you in the deployment of the defending Japanese. You win or lose via the seizure of (or failure to seize) key areas on the map. You are cast in the role of US Sixth Army Commander Lt. Gen. Walter Krueger. In turn, you’re under considerable time pressure from theater commander Gen. Douglas MacArthur (portrayed passive-aggressively by the victory conditions and six-turn limit) to be finished with the major portion of the campaign no later than the end of March. That’s necessary to allow the redeployment of major aero-naval assets for the Iwo Jima and Okinawa battles.

The Tyranny of Terrain - The fight for Hill 112 in Normandy: Hill 112 was an important strategic landmark in the German defense of Caen. In the weeks that followed the Allied landings on the Normandy coast, British forces conducted a number of operations to seize this vital piece of territory.
West of Stalingrad: The Battle of Stalingrad is usually portrayed as a brutal urban fight, but another important battle occurred west of Stalingrad in the weeks prior to the German attack on the city.
Opening Pandora's Box - Chemical Weapons & Operation Sealion: Recently declassified intelligence documents from World War II have given much greater detail about German preparations for chemical and biological warfare in Operation Sealion.