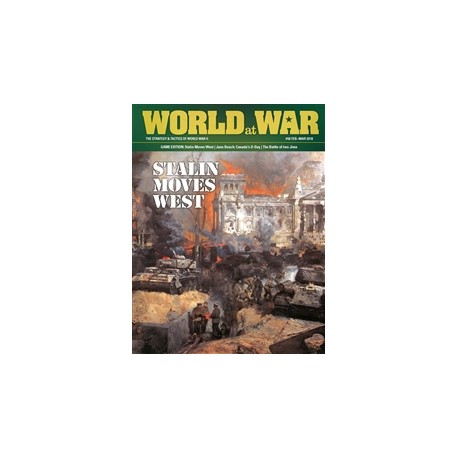 in this World at War magazine you will find historical articles and the 2 players wargame Stalin Moves West with die cut counters.

Stalin Moves West is a two-player strategic level hypothetical simulation of a potential World War II campaign in which the Third Reich did not invade the Soviet Union in 1941 and instead Stalin launched an invasion of central and western Europe. The map depicts the Soviet Union (USSR), the Greater German Reich, the General Government (German-occupied Poland), Hungary, Romania, and Slovakia as they were in 1941.

Each hex on the map represents about 70 kilometers from side to opposite side and each game turn represents one month in summer and two in winter. Units are corps/armies with supply, leadership and air support covered as unique support units on the map. The uncertainty of the effect of the purges is depicted by the Soviet units being deployed to show their “untried” status, where even the Soviet player is unsure of the combat value of any given unit. The game has several different scenarios which look at various situations in which such a war might have occurred.