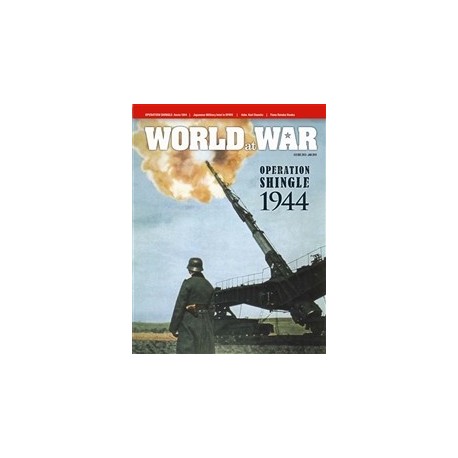 in this World at War magazine you will find historical articles and the wargame Operation Shingle with die cut counters.

Operation Shingle: a combat history and analysis of the January-May 1944 Anglo-American landing at Anzio, behind the main German front in Italy.

To reinvigorate their stalled Italian campaign, the Allies landed a reinforced corps at the small coastal town of Anzio, just 30 miles from Rome and the German supply arteries. A hesitant advance and a rapid German reaction set the stage for a nip-and-tuck battle for the beachhead.

This classic campaign is covered using the Fire & Movement system at one kilometer per hex and one day per turn. The standard unit is the infantry battalion, which can be strengthened by a multitude of tanks and other heavy weapons, plus fire support markers rated for different weapon types up to and including a massive heavy bomber strike.

Each player has several strategic options, kept secret from his opponent, to use the fight for the beachhead to further the larger campaign. All strategies and operations are constrained by limited logistics; players must balance carefully his expenditures for reinforcements, replacements, and fire support. The player who strikes the best balance, and who best utilizes the various weapons at his disposal, has the chance to achieve a war-changing victory.