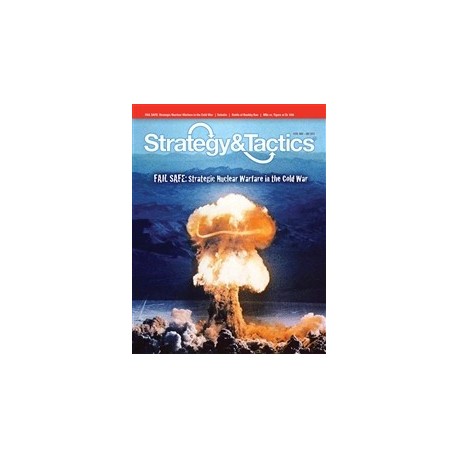 In this Strategy and Tactics magazine you will find historical articles and the wargame Fail Safe with die cut counters.

Fail Safe is a wargame of a hypothetical strategic nuclear air war sometime in the late 1950s, before the age of the ballistic missile. There are two players, the East Bloc and the Free World. Each player has units representing formations of aircraft, weapons systems, and air defense forces. Players move their units, conduct air-to-air battles, and bomb ground targets. The objective of the game is to drop sufficient nuclear weapons upon the other side in order to prevent them from dominating the world.

The game map encompasses much of the northern hemisphere, centered on the North Pole. Each game turn represents an hour or more of flight time, and each unit represents a wing of specific aircraft, by type.

Fail Safe: a history of the USAF’s Strategic Air Command, from its founding shortly after WW2 through the early 1960s, when ICBMs began to replace the manned bombers. What atomic war would’ve been like in those times.