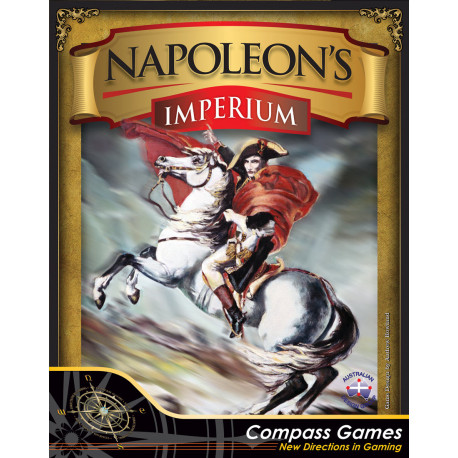 Napoleon’s Imperium, 1798-1815 is an addictive and exciting new Napoleonic War game for two to eight players on a grand scale that has undergone more than 28 years of design and development.

Designed for two to eight players, the game pitches eight Empire Nations of the Napoleonic Wars, divided into two Alliance’s in a fight to the death struggle for control of Napoleonic Europe. The game has a “Churchill war room” feel with large numbers of counters representing age-of-sail style Fleets, Artillery, Cavalry, Infantry, Commanders, Spies, the colors (flags) and the odd camel just to mix it up! It’s big, it’s bright, it’s attractive, it’s interactive and it’s addictive!

Napoleon’s Imperium is a turn-based game that is restricted by a timeline of years.

A typical game is five to six years or turns. Approximately 80 to 100 battles will happen in that time.

A Campaign Game can last up to 5 to 20 hours depending on the skills of the players as they seek to achieve a Capital Victory.

The objective of Napoleon’s Imperium is for one Alliance to conquer the other by either achieving a Capital Victory (capturing key enemy territories) or a Battle Points Victory (based on favorable outcomes and achievements made during game play).