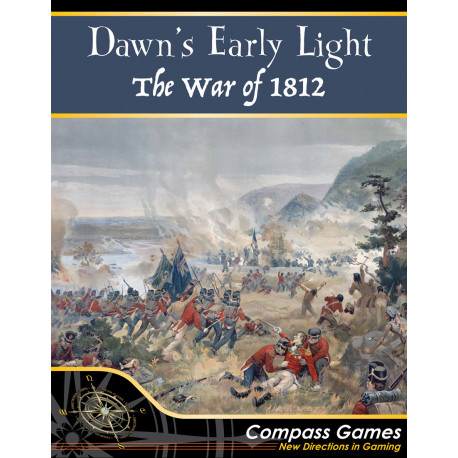 Dawn’s Early Light: The War of 1812 is a two-player card-driven grand strategy game: a quick-playing, high-level abstract recreation of the entire conflict encompassing the territorial, naval, political, and economic competition between the two sides. Players will appreciate the high-production quality of the components which includes a MOUNTED game map and large, 5/8" size punch-out counters.

Players take the role of the United States or Great Britain over a four-year period spanning the war and its prelude, with game cards for events and operations that offer players the tools to remix the entire scope of the conflict. Events such as “Andrew Jackson,” “Old Ironsides,” “Laura Secord,” “Tippecanoe,” and “Dinner at the White House” recreate the characters and moments that shaped the war, while operations such as recruiting, campaigning, privateering, raiding, and shipbuilding let players take it in their own direction. Each side earns victory points for capturing the enemy’s towns and territory, outcompeting them at sea, and outmaneuvering them in politics and public sentiment.