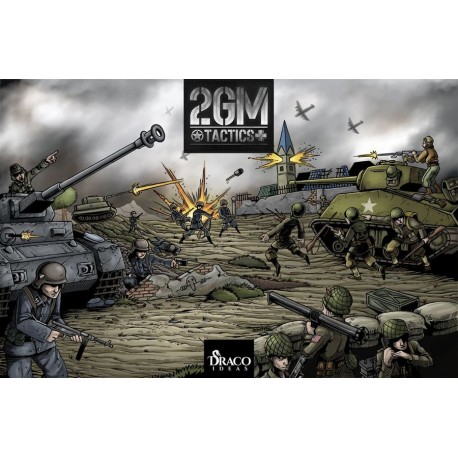 2GM Tactics is a full-fledged strategy card war-game where units are represented by cards and you’ll be in command of your army.

You’ll have to build your deck to achieve the goals you’ve been tasked for. Gear up your troops for the battle; deploy all type of units: armor, artillery and transport units; request air support and deceive your enemy. Lead Patton or Rommel to the final victory; seize buildings; destroy your enemy and conquer the battlefield! Play historical scenarios: go ashore in Normandy, defend Monte Cassino or dig in the Ardennes!

You can play 2GM TWG in two ways. You can play a “Battle Royal” - players will establish a number of points, they will set up the battlefield prior commencing the battle and the goal is to destroy your opponent’s Head Quarter; or you can play a “Scenario” – historical or not – with a predefined set of rules to deploy units and the terrain, and pre-established conditions of victory.

In a player’s turn you’ll gain a number of “Action Points” that will be used to deploy new units on the battlefield and to employ other supporting cards. These Action Points will increase by several ways as the game evolves.