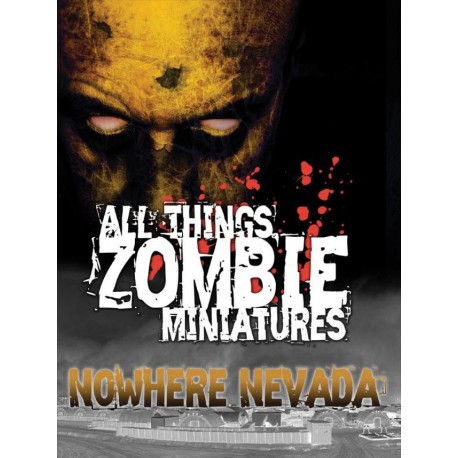 Nowhere Nevada is an All Things Zombie Miniatures expansion.

Humanity is making a comeback. The zombies had us on the run, but now it’s time to send in the military starting with the National Guard and even the army if need be. The outbreak (Day One) took mankind by surprise, and for a long time, there’s been no sign of resistance. But now rumors of safe zones are spreading through the land. They say the military has taken back large areas and local radio broadcasts are urging survivors to head to these safe havens.

But not everyone wants to go.  Groups of survivors have their own safe areas under their control. They are self-sufficient and doing okay. Not great, but okay. And they like their new found freedom and look forward to finding like-minded recruits. They’re making the best of a bad situation.  But they’re not alone. Gangs of lawless people have their own areas under control. These gangs patrol the highways looking for loot, prey, and in some cases new recruits. They like things just the way they are. In Haven, you have three options –

MILITARY - We allow you to command military units by introducing you to better weapons, new equipment, and a list of missions for you to play. It’s time to kill some Zombies and pacify the area.
SURVIVOR - We provide you with Nowhere Nevada, a self-sufficient community that you can explore, trade, and perhaps recruit from.
GANGER – We give you a ready-made gang, place to live, and opportunities to grow your power.

All Things Zombie Miniatures – NOWHERE NEVADA… Send in the army!