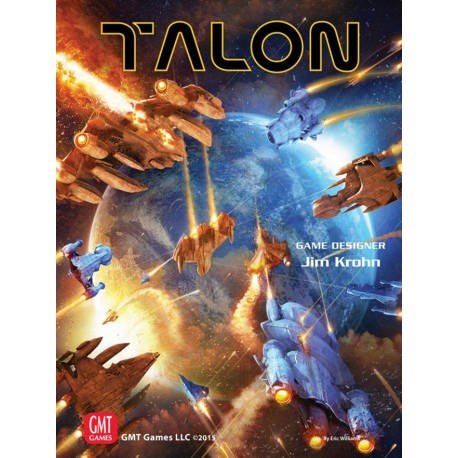 Talon is a game of tactical space combat set in a growing universe with its own history and back story. This game introduces battles during the First Talon War between the Terran Confederation and the Talon Empire.

Long hampered by cost and beset by international problems, real space exploration did not seem possible for humanity. Amazing technological breakthroughs would change all of that in the year 2112. The invention of the Near Faster Than Light (NFTL) drive would make it possible for large ships to move easily in and out of a planet's gravity well, and to travel quickly within the confines of a solar system. Ten years later, the perfecting of Faster Than Light (FTL) drive would turn the galaxy into an open canvas. United by a common purpose, the newly formed Terran Confederation began to paint their picture.

Expansion led to colonies, research stations, and even more technological discoveries, but it also led to the realization that they were not alone. Although no sentient alien species had been encountered, long range scanners had picked up the distinctive signatures of FTL drives. Sentient races must exist... and they must be space faring. Terran expansion stopped.

Not knowing what to expect, a period of consolidation followed which emphasized defensive technologies and fleet building. First contact was made by the people of Earth with this unknown race in 2227. Over time, they would eventually call these other-worlders the Talon. It was a shortening of the alien sounds that made up their name but it was also oddly prophetic-the Talon Empire swooped in very much like a raptor upon the fledgling Terran Confederation.

Map: Each hex represents a region of space that normally holds only one ship

Solitaire Suitability: there is no hidden information and no simultaneous action

This is a Fleet Combat game. Battles with individual ships can be fought, but the game easily and quickly simulates combat with fleets of 3-10 ships. These are fleets of Capital Ships. This is NOT a game about fighter combat in space. Most ships in the game are large and you must balance your ships' power output between shields, weapons, sensors and maneuverability - you are not just doing an Immelman. Each faction has unique abilities and each ship has unique features. Proper strategy involves assessing the different abilities of your ships and the enemy's.

This is an Accessible game. The complexity of managing fleets of capital ships has been baked into the game system, leaving the player free to make interesting decisions. It is also a Fast Paced game. Small fleet scenarios can be played in one hour, larger ones in under two. This makes the game thematically rich and full of quick but meaningful choices.

How can the game do all this? All a ship's energy use is integrated into something called a Power Curve. All a player has to do is adjust the speed of the ship. A ship's speed determines how much Available Power it gets to charge weapons faster, reinforce shields, tighten turns... but there will never be enough of it. The game is fought on a Map - distances moved, firing arcs, shield arcs are distinct and easily resolved. The game uses Very Large, Laminated Counters. All of a ship's systems are displayed directly on the counter and lamination allows you to mark damage and other ship info with a dry erase marker. All of the important information is at your fingertips, at-a-glance, on the map. Being able to see the battle unfold on map allows the game system to handle a much larger number of ships without confusion and effort.