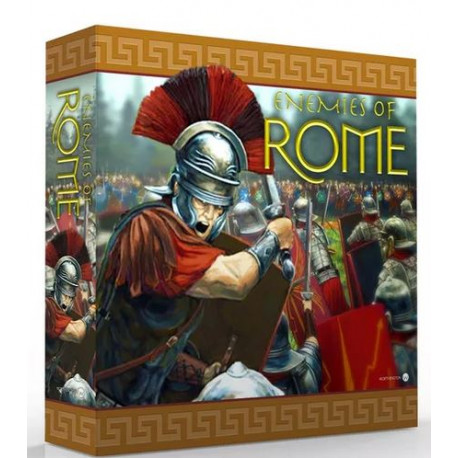 Rome wasn't built in a day, but now you and your friends can in 2 hours!

Using cards you lead your legions across the Roman world dealing with uprisings among the tribes and conquered areas. Do you move your legions or the enemies of Rome?

You must make the decision of which card in your hand to play. As you play conquer new areas togain glory as a leader of Rome's legions. Use that glory to gain influence for political intrigue points to spend to convert enemies of Rome to allies of Rome, recruit new legions, build catapults and siege armies or fortify areas.

ENEMIES OF ROME is a 2 to 5 player game that plays in 90-120 minutes. Each player is a leader of Rome's vaunted legions. The game board portrays Europe, the Middle East, and North Africa. The game takes place in Roman history from 300 BC to 300 AD. A deck of 55 cards allows players to maneuver their forces, as well as the many enemies of Rome, while they try to become the one true Caesar.

The cards portray historic events from Roman history from 300 BC to 300 AD. Wooden cubes represent the legions of Rome, as well as the enemies of Rome. Special battle dice allow players to fight the enemies of Rome as they try to expand the Roman empire.

Historical events on the cards cause surprise and no two games will ever play the same. Gamers can form alliances to try to block other players.