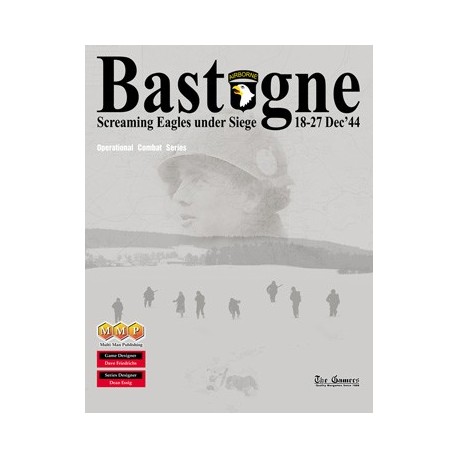 "Bastogne is a game covering the defense of the little crossroads town of Bastogne from 18 December to 26 December 1944. It is not a game about the whole Ardennes Offensive, but rather a close-up look at the actual perimeter battle to protect the town and the mechanized delaying actions leading into it. The map only extends as far east as Longvilly and north to Noville at 400m per hex. Each turn is a day, units are generally companies.

Bastogne comes with special rules for road marching, Team SNAFU, barrages, and air strikes - but is built around a quick-to-play, simple-to-learn framework. Bastogne has three scenarios: an introductory scenario covering the Battle for Noville, a medium-sized one covering the Battle for Longvilly, and the withdrawal of Team Cherry plus the counterattack by the 501st Airborne Regiment, and the campaign game itself covering the whole action in a jam-packed 10 turns. A number of variants have been provided so you can experience the game over and over looking at fresh insights."

Evaluations produits
Great entry game into the world of wargames.