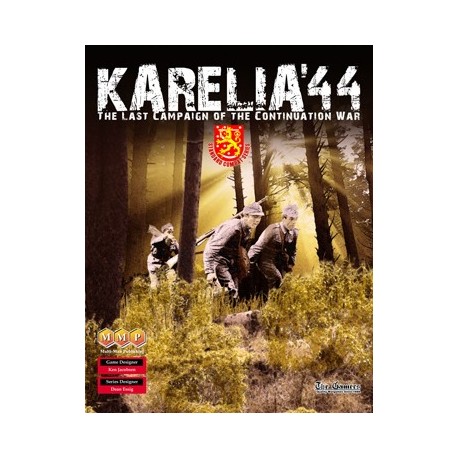 Karelia ’44 is an operational level game that focuses on the last major campaign of the Russo-Finnish Continuation War (25 June 42—4 Sept 44). STAVKA planned an offensive during the summer of 1944 to coincide with the Normandy landings. The objective was to force Finland out of the war. Towards this end, the Soviets amassed two ground armies, one air army, and an impressive amount of artillery. Confident after a series of victories against the Germans, the Red Army attacked in Karelia on 9 June 44. The attack began with an overwhelming artillery barrage (second only to the Oder crossings in intensity). Finnish lines were pushed back and then breached—the race for Viipuri/Vyborg was on. The capture of this city would open the road to Helsinki.

The game features a unique “Boss Point” System which precludes either player from knowing how long the game will last. For the Russian player, this represents the gun to his head of an unhappy dictator who will gladly send you to a Gulag forever if you fail in your goals. For the Finns, you know that you are understrength and that the Russians will destroy you if given enough time, but you need to hang on for dear life in order to be in the best possible position when the Boss’ patience runs out.

Players will find two very different armies to command. The Russians are the proverbial 500 lb gorilla, but one that takes time to prepare big operations and isn’t fleet of foot enough to do small scale attacks.

The Finns have splendid artillery and are designed for a mobile defense which, if done right, will leave the Russians flailing in the air. You have three defensive lines to use and an innovative “ghost” unit feature that allows your thin ranks to try to hang on to them.

Please note, this is not the Winter War of 1939! This is a well developed late war Russian army, not the hapless troops of the opening years of the war. The Finns need to be on their toes to stand a chance.

Karelia '44 is the 14th game in the award winning Standard Combat Series. Emphasizing easy to play rules, SCS lets the player get right into the game!