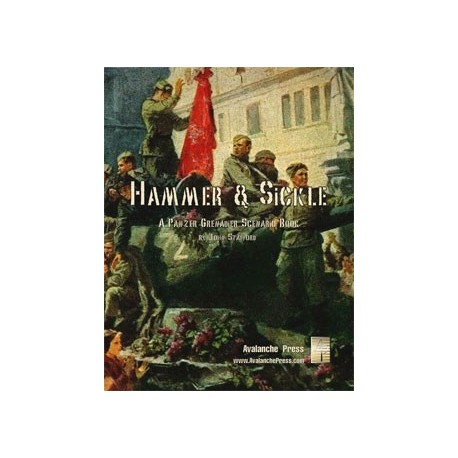 Three years after the Union of Soviet Socialist Republics and the United States jointly vanquished Nazi terror, the two former allies began a four-decade-long Cold War. While it never ignited into a Third World War, both sides armed for it, trained for it, and planned for it. Hammer and Sickle explores the use of huge tanks and other weapons prepared for this war that never happened. Besides the twenty scenarios, players can take the role of the 11th Tank Corps, 8th Guards Army as it fights a hypothetical campaign to seize the American airfields at Rhein Main (Frankfurt am Main) and Wiesbaden, followed by the border crossings near Saarbrücken.

Unlike most other Panzer Grenadier titles, Hammer and Sickle covers battles that never happened. We’ve given you one plausible scenario background leading to war, that provides the setting and troops for the scenarios and campaign included.

Hammer and Sickle includes 77 mounted and die-cut Soviet playing pieces. Playing all of the scenarios and the campaign in this supplement requires the use of the included pieces plus boards and pieces from our Road to Berlin and Elsenborn Ridge games. We hope you enjoy them.