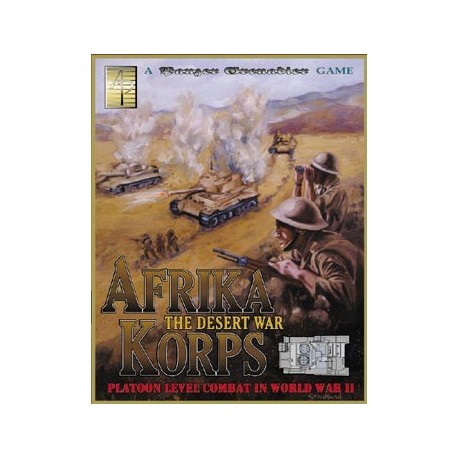 Italy entered the Second World War in June 1940 without making many preparations for a long conflict. With France on the verge of surrender to Germany, it seemed important to Benito Mussolini to get in on the peace conference as a victor.

But the war did not end, and the Italian armed forces found themselves having to mount campaigns they did not expect. After shipping troops and supplies to the Italian colony of Libya, the army there finally invaded British-held Egypt in September 1940. A series of campaigns followed as first one side and then the other gained the upper hand.

Afrika Korps covers the battles from the first segment of this campaign, in the Panzer Grenadier game system. The 50 scenarios range from the initial Italian raids of June 1940 to the Allied “Operation Brevity” of May 1941. Actions range from small but intense infantry fights to wide, sweeping tank battles. Afrika Korps is a complete standalone game, not requiring any other products for full enjoyment. Other desert war battles are found in Desert Rats.

Afrika Korps has the largest playing surface in the series, with three 22x34 maps printed on heavy paper. There are scenarios which use only a fraction of one map, but also a few using all three.

All the troops and tanks of the British, Australian, Italian and German armies that fought in Libya and Egypt are included. The British have good infantry, though their firepower is less than one might imagine because their platoons are smaller than those of other nations (four per company, vs. three in most other armies). Their tanks are less impressive, with fast but ill-armored vehicles like the A9 and A13 or thickly protected but painfully slow like the Matilda.

Italian tanks are worse. Both the M11/39 and M13/40 are as slow as the Matilda, with less armor than the Crusader and a gun with a shorter range than the British tanks. Italy does field elite Bersaglieri infantry, but leadership is often weak as is artillery support.

The Australians only have a handful of tanks (captured Italian M11/39 and M13/40) but are very tough infantry with excellent leadership. It’s the Germans who field the best tanks, the PzIIIJ and PzIVE. They have good infantry, good leadership, and the absolutely deadly 88mm gun.