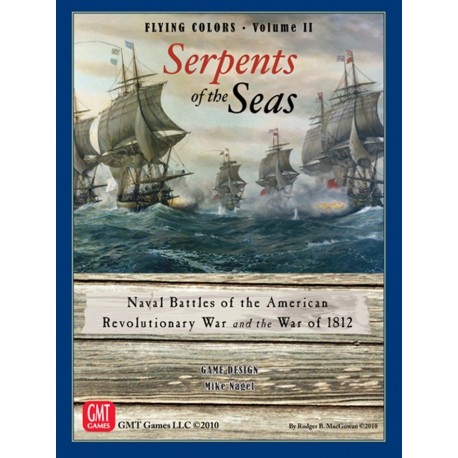 En savoir plus sur Serpents of the seas

In 1775, Colonel Christopher Gadsden presented his design of a naval jack to the first commander-in-chief of the newly created Continental Navy. His design of a coiled serpent on a yellow background was derived from a similar design found on drums carried by the first Marines. Printed with the design was a motto that embodied the sentiment of the American colonies:
“Don’t Tread On Me!”
Serpents of the Seas is the second stand-alone volume in the Flying Colors series of naval combat games and represents frigate actions and the rise of the American Navy. Unlike the larger battles between ships of the line depicted in Flying Colors,
Unlike the larger battles between ships of the line depicted in Flying Colors (Volume I), Serpents of the Seas includes sixteen battles from the American Revolutionary era and the War of 1812 that involve smaller ships -- from tiny gunboats with only one or two cannon through “5th Rate” frigates of less than 50 guns.
Also depicted are three dozen “Ship Duels” between one or two vessels on a side, like the mighty Constitution (“Old Ironsides”) against her foes Java and Guerriere. To make these duels more challenging, an all new initiative system has been created using activation cards that might grant players a jump on their opponents, but limit their flexibility in the process. The cards can also be used as events that provide additional shipboard flavor. These new systems are fully compatible with the original Flying Colors game, with mechanics that can be selected a la carte.