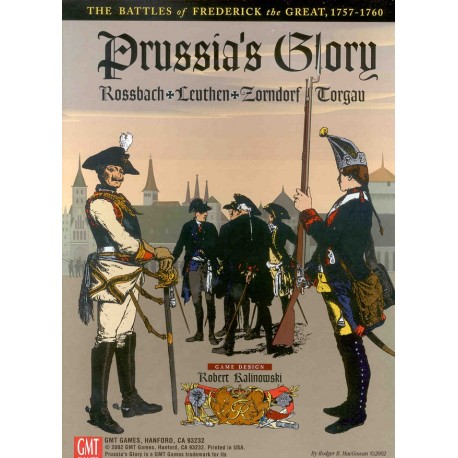 Four of Frederick's most famous actions come to life using a system heavy on nuance but easy on time and space. From the Prussian triumphs of Rossbach and Leuthen to the bloody ordeals at Zorndorf and Torgau, players can examine the Seven Years' War in games playable in a single evening. Graphic icon counters capture the colorful splendor of 18th century Prussian, Austrian, Russian, French, Saxon, and Holy Roman Empire forces. Short Battle Scenarios place the armies in their historical deployments, while the Main Scenarios give players the chance to recreate or alter their armie's critical approach marches to the field, radically changing deployment possibilities with intriguing pre-battle maneuver.

Rossbach: Oblique Ascendant
Frederick's purest enactment of the oblique attack, where his 22,000 crack troops outmaneuvered and crushed a French-Empire army twice their size. The Main Scenario starts with the French in their fortified camp, but falling morale pushing both sides to act; can they wait until the Prussians are forced to attack? Will they improve on the historical march and get properly deployed for a classic "numbers versus quality" battle? Tough choices amid shifting opportunities face each side.
Leuthen: Triumph of the Age
The Prussians gain an even greater victory in a hard-fought battle against the Austrians, inflicting 10,000 casualties and taking 12,000 prisoners in what historians have dubbed the greatest triumph of Frederick's generation. The Main Scenario allows altered Austrian set-up and an option command switch; could Frederick have defeated a better-deployed foe led by the unflappable Marshal Daun?
Zorndorf: First Savage Embrace
Frederick's first encounter with the Russians, termed the most savage battle in the Seven Years' War. A balanced, challenging and bloody fight where 30-50% casualties are the norm!
Torgua: Dark Maelstrom
Frederick faces arch-foe Marshal Daun. Enduring the war's most terrible artillery fire, the Prussians manage to force an Austrian withdrawal despite brutal enemy counterattacks; a pyrrhic victory on a field sown with 36,000 casualties, the war's bloodiest battle.

Prussia's Glory has a simple turn sequence, low unit counts, and a single Combat Results Table combat system that engenders quick play, but stacking, movement, and Zone of Control rules subtly capture key aspects of linear warfare. The system deftly portrays the crucial role of artillery, with a wide variety of ordnance on some of history's most "cannon heavy" battlefields. With ease of play akin to the classic 1970's quadrigames, Prussia's Glory offers a dash more tactical chrome, a large slice of operational nuance, and a full plate of stunning GMT graphics - for anyone with the stomach to stand up to cuirassier charges, Shuvalov howitzers, and musket volleys at 40 paces.