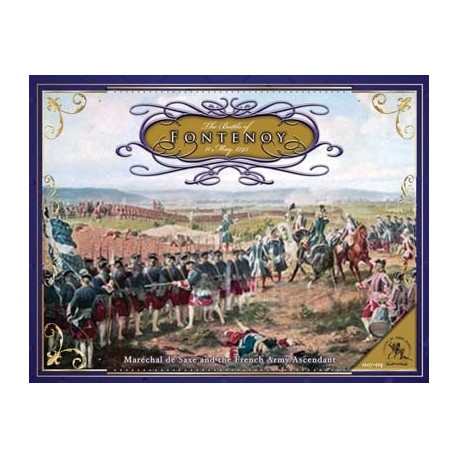 Fontenoy, 11 May 1745 - Maréchal de Saxe and the French Army Ascendant, brings the highly successful Battles from the Age of Reason series to the War of the Austrian Succession. Fontenoy is a tight contest between the greatest general of the war-- Maurice de Saxe--commanding French troops behind defensive works, against the inexperienced Duke of Cumberland who commands a mixed group of Allied troops.

Fontenoy includes several nationalities not yet seen in the BAR series: French, Dutch, Hanoverians, and English troops on the Continent, and offers a tactical situation far different from any other BAR game. Aside from the classic, historical battle in which the Allies try to breach the French defenses, variant rules allow the Allies to try to outflank the French, add more forces to both sides, and even take away the French defenses for a straight-up contest on the plains of Flanders. There are nine scenarios in all and a multitude of optional rules so that gamers can tailor the battle to their taste.

BONUS GAME!
Also included is the Battle of Melle, 9 July 1745. This is a complete battle with a small number of counters per side, played out on a half size map. Melle is a rare meeting engagement, and is a swirling, chaotic battle as each side seeks to obtain their objectives before night falls. Melle is a quick-playing game, ideal for BAR beginners, or for those who want to play out a full battle in one sitting.