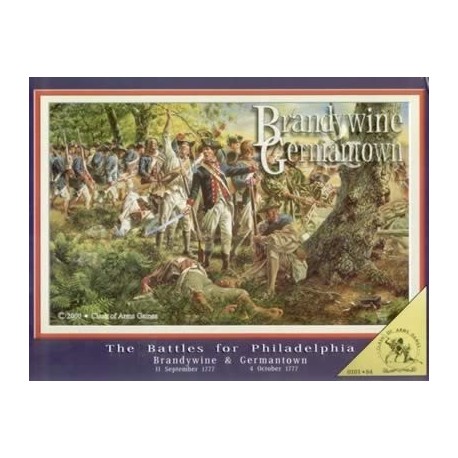 Brandywine & Germantown expands the Battles from the Age of Reason Series
into the American War of Independence. Both games are in the same box, using
a single scenario book, and most of the same counters (many American and British units fought at both).

The games adhere closely to the highly successful BAR rules system. The major change lies in the halving of the strength point ratio so that 1 pointequals 50 men, 25 horsemen, or 1 cannon, accommodating the smaller battles and units of North America. This will, in turn, result in a doubling of stacking limitations (map scale remains the same as the other BAR games). There is a noted lack of cavalry in both battles.

The counters are in the same style as the other BAR games, but with some interesting variations (e.g., rifle frocks). Brandywine (three maps) has 4 scenarios: Knyphausen's attack at Chads Ford, Cornwallis' attack at Birmingham Meeting House (both one mappers), Howe's historical plan (comprising both Knyphausen's and Cornwallis' attacks), and an optional Howe plan. The latter scenario will allow the British player to select alternative schemes of maneuver to attack the Americans. Washington, in turn, has the ability to gain intelligence on the British movements (both true and false information) and possibly readjust his force. Germantown (two maps) has 2 scenarios. They vary based on whether or not the Americans are required to seize the Chew House.