Panzer Grenadier: Campaigns and Commanders Vol. 1: War in the East 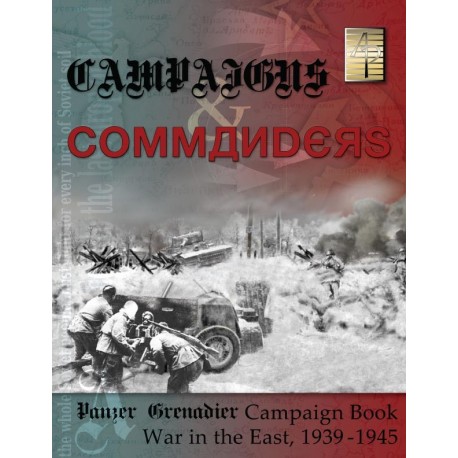 Each book in the series includes historical campaign games that let Leader Characters fight a sequence of battles where they can gain combat experience, improve their leadership abilities and acquire new skills. Most importantly, Leader Characters can earn medals for bravery and move up the ranks so that by the end of the campaign they can be high-ranking officers in command of large military formations. Leader Characters who survive a campaign can move on to new campaigns later in the war.

In addition to the campaign game scenarios, each book includes rules that let players design their own scenarios and create their own campaigns. There is a detailed point-based force-generation system for players who want to plan an entire campaign in advance, and a random scenario generation system for players who want maximum “Fog of War” in their campaigns. This gives the system infinite re-playability and lets players take their Leader Characters into any World War II combat situation imaginable.

War in the East includes the campaign games "The September Campaign: 1939," “Barbarossa: 1941,” and “The Battle for Germany: 1945.” It also includes historical articles and strategy tips on how to use Leader Characters in battle. It is not playable by itself, but requires ownership of Eastern Front Deluxe, Road to Berlin and White Eagles to enjoy all of the campaigns.