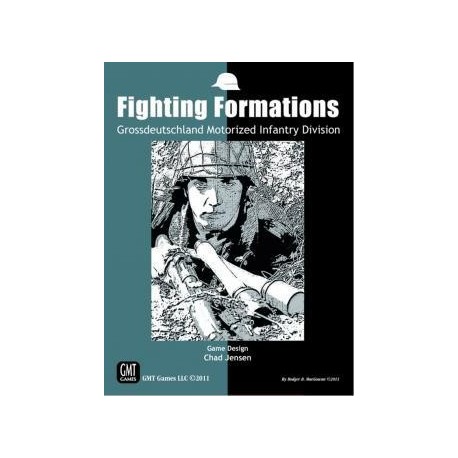 Fighting Formations is intended to be an ongoing series of wargames covering WWII tactical combined-arms combat at the platoon and squad levels. Each game in the series will feature a distinct combat unit, highlighting battles in which that unit participated as well as its particular order of battle and fighting characteristics. The first title in the series is "Grossdeutschland Infantry Division" (FF:GD). Future titles aren't yet set in stone but could be devoted to other famous divisions (Big Red One), Corps (Afrika Korps), regiments (442nd RCT), Commando troops, Ranger battalions, etc.

GAME FLOW: In each scenario, one player will take command of elements of the featured unit while the other assumes control of the opposing forces. These two players will alternate giving orders, activating their units on the map for various military functions. Players attempt to achieve victory by moving their combat units across the game map to attack their opponent’s units and to achieve as many scenario objectives as possible. The degree to which a player succeeds or fails is measured by a scenario’s specific victory conditions—be it the destruction of enemy units, the taking of vital mapboard objectives, or the exiting of friendly units off the opponent’s map edge.

ORDERS & INITIATIVE: Each game turn is divided into ten orders, with each player performing a variable number of these orders. In each turn, the sequence of play is fluid – with orders being given by the active player and reactions being taken by both players – depending upon the relative initiative level at any given moment. Fighting Formations is also not the typical Igo-Yougo fare with a strict sequence of play. Instead, the base game engine is an impulse-type back and forth mechanic whereby the various Orders carry with them a certain cost in Initiative. The game has a “pool” of 40 Initiative that is “spent” to give orders and then to activate units for those orders. At the end of every order the player with the most Initiative is able to give the next order. In response, the opponent can also spend Initiative to conduct both Opportunity Fire (at moving units) or Reactive Fire (at firing units).

ASSETS: The game has Asset cards -- including smoke, artillery, air support, man-portable support weapons and demolitions -- but is not card-driven. Each Asset will either take the place of a standard order or provide the player with some form of reactionary capability during an order.

SPECIAL RULES: FF:GD is a stand-alone game in the Fighting Formations game series. While utilizing the basic rules, FF:GD’s playbook includes specific terrain, fortification and unit special action rules in order to more accurately portray tactical warfare as experienced by the participants in Russia during this time period.

SCALE: The scale of the game is 75 meters per hex with turns representing about 5 minutes of real time.

UNITS: Units represent infantry squads, guns with their inherent crews, and individual vehicles. Platoons are also employed. Leaders are abstractly represented by Command markers, each one coordinating the actions of friendly units within a scenario-defined radius.

COMPONENTS: This first game has the following components: