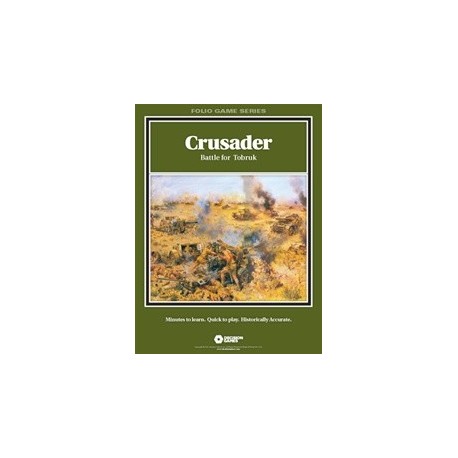 The port-town of Tobruk was the key to Libya. The Axis had been besieging it since April 1941, threatening to push the Allies back into Egypt. The Afrikakorps, commanded by Irwin Rommel, had already defeated the Allies’ previous attempt to relieve Tobruk, Operation Battleaxe, but a new, surprise Allied offensive in November 1941, Operation Crusader, would evolve into one of the most chaotic and near-run battles of the entire North African campaign.

Crusader utilizes the new Fire & Movement combat system that’s designed so players can augment their units with “support fire” during the course of the battle. From mortars to tanks, units can receive support assets to engage enemy positions and formations, allowing combat to develop at all levels. A single recon battalion, for example — perhaps supported by air cover — could be tasked to assault a lone enemy infantry regiment defending a key hilltop. As that attack gets underway, the recon battalion may find itself under the guns of enemy artillery. So more support fire will be necessary to take the hill, but assets are limited.

In Crusader, the attritional design of the new Combat Results Table simulates the true nature of battles in North Africa. Units are typically two-sided formations that can incur casualties, accurately replicating the realities of combat and the high losses sustained by both sides during the actual fighting around Tobruk. Winning the battle is thus a matter of maneuver, firepower and asset management.