All is lost save Honour 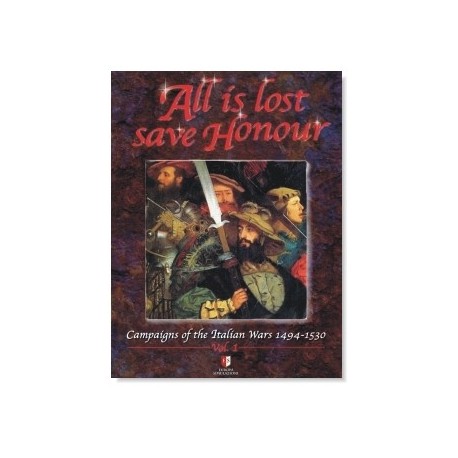 En savoir plus sur All is lost save Honour

We had to make a selection of all those campaigns fought in Italy during the Italian Wars. The five campaigns we have included are:
- Agnadello 1509, Venice defends its Republic against her foes.
- Novara 1513, the Swiss against the French army. The last triumph of the Swiss.
- Marignano 1515, Franois I grabs the Duchy of Milan from the Swiss
- Bicocca 1522, the French lose the Duchy of Milan
- Pavia 1525, Franois I loses the largest battle and Milan to the Empire

This is the time of charges of cavalrymen with the finest gliding armours; of the first use of effective firearms and artillery; sieges, mercenary troops, treachery, pillaging and all that chrome that may enlighten a wargame.

* new game system, operational-level, devoted to warfare in the XVIth century campaigns
* highly interactive sequence of play, focused on manoeuvre and careful planning
* various forms of combat: Major battles,Skirmishes, Sieges
* set of Exclusive Rules and specific rules and events for each campaign
* a 22" x 34" fine-art map , reproducing a part of XVIth northern Italy, based on an accurate study of ancient maps and sources
* gorgeous iconic counters representing all the main Capitani who fought there and the different combat units
* detailed (as it is possible) order of battle, with combat units differentiated by strength, maximum movement, quality and reliability
* very low counter density and limited play time