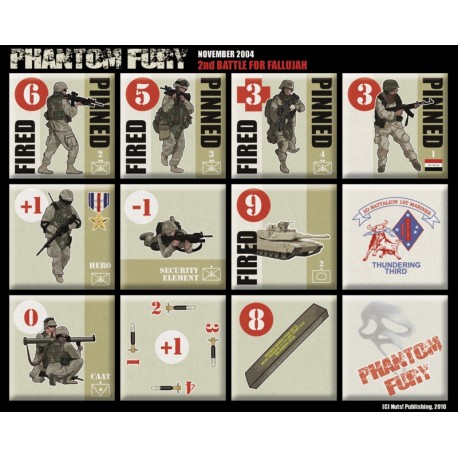 This solitaire game simulates, at tactical scale, the combat waged by US forces during the month of November 2004 to secure the city of Fallujah and crush insurgent resistance. The game particularly focuses on the fighting of the 3rd Battalion, 1st Marine Regiment, 1st Marine Division in the Jolan district in the north-west part of the city on the morning of 9 November. The player controls USMC troops while the system handles the insurgents.
This design is based mainly on the article "Infantry Squad Tactics: Some of the lessons learned during MOUT (military operations in urbanized terrain) in the battle for Fallujah", published in the September 2005 issue of the Marine Corps Gazette.
The map includes a part of the Jolan District, divided into 61 zones of approximately 50x50 meters and sections of road of equal size. Each zone is made-up of several locations (open ground, courtyard, first storey, second storey, rooftop) represented by boxes that are used to manage movement. Tracks and charts are also on the map edges.
The troops of each side are represented by "unit" counters, each corresponding to one Marine squad (six to 12 men) or a group of insurgents (about six men each). The total strength of USMC forces is about that of a reinforced company. Each squad has a combat factor that is used to resolve firing and assaults. The attachment of a Combined Anti-Armor Team (CAAT) to a squad increases its combat factor in certain cases. When a USMC squad suffers a step loss during combat, the counter is flipped to its reduced side. If it suffers another loss, the unit is removed from the game (i.e., the squad is no longer operational and the wounded are evacuated to the rear). Insurgent units appear in two distinct types: guerrilla units and martyr units, also each with their own combat factors. Guerrilla units fight USMC troops but withdraw rather than be destroyed. Martyr units, instead, have vowed to die where they stand and kill as many enemies as possible. These units are immobile and, within their fortified positions, await the attacks of USMC forces. At all times, insurgent units are eliminated after suffering one step loss.
Insurgent units do not appear directly on the map. Initially, the player deploys "suspect" markers which represent a potential, non-identified danger to USMC troops. Their placement is partially random. Once fired upon or assaulted, these "suspect" markers are activated and their true nature (dummy, guerrilla, martyr, IED, or sniper) is revealed. However, USMC troops can also count on the support and fire power of a pair of M1A2 Abrams tanks. A section of Iraqi soldiers from the Iraqi Intervention Force (IIF) is also available, their mission being the capture of the mosque in Jolan, as the USMC troops do not have the right to enter that zone.
The game lasts a maximum of 16 turns, each representing about 15 minutes of real time. Each turn begins with a variable cycle of USMC support missions. These missions are of three types (reconnaissance by drones - UAV, close air support by helicopter, and aerial bombardment). Each of these missions can only be conducted a certain amount of times per game, and their execution is not automatic. In case of a mission being cancelled or delayed, the insurgents can temporarily take the initiative and act (reinforcements, withdrawal, counter-attack, etc.). Then, a reinforcement phase allows the player to enter extra troops onto the map at the cost of victory points. Each squad then has the opportunity to fire or move. After conducting movement, the player resolves his assaults against insurgent units that are adjacent to his Marines. Before launching an assault, a squad can detach its security element in order to isolate the zone and prevent any retreat by the enemy. There are three types of assaults in the game, depending on the locations occupied by the belligerents: "top-down", "bottom-up", and normal. Each type has their advantages and disadvantages for the attacker and defender. CAAT support can also use their incendiary explosives to eliminate insurgents that are too strongly entrenched. Also, each assault can be accompanied by a random event which will influence its result. The game turn concludes with a re-organization phase during which the USMC capture of zones and the infiltration by insurgent troops is checked.
At the end of the 16 turns, the player determines his victory level. If all of the zones on the map are not controlled by the USMC, the player loses the game. If at the end of any turn the USMC controls every zone, the player wins the game and calculates his victory points to determine the extent of his victory (major, minor, bitter). A full game can be completed in about four hours.