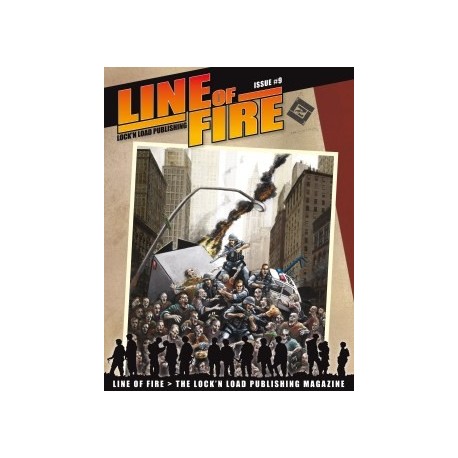 Line of Fire #9 is now available. It’s another packed issue, with over 60 pages of content, an 11" x 17" White Star Rising map, and die-cut counters. And again, have it your way, as a printed magazine or a downloadable pdf.

In the issue are:

Eight-Eight die-cut (in the professionally printed version) counters including counters for World at War, White Star Rising, and for the first time, Island War Deluxe. The downloadable PDF comes with the same counters, but you'll need to mount them yourself. A spiffy new version of Mark Mitchell’s All Things Zombie FAQ.Batreps for scenarios from The Untold Stories and for an ATZ scenario included in the issue.
An in-depth review of John F. Stanoch’s Black Cross / Blue Sky by Blue Sky Game Works.
Nationality Capabilities Chart.
Previews of Nations at War: Desert Heat and Run, Fight, or Die!
Tactics articles for All Things Zombie, Tank on Tank and House of Spirits, and articles on Memoir ’44 and a Curmudgeon’s view of the hobby.
And did we mention scenarios? How about 18 of them!!
Two for Forgotten Heroes.
Two Nations at War scenarios played on a new and included 11” x 17” Bocage-heavy Map. A three-scenario Normandy Mini-Campaign for Nations at War: White Star Rising.
A five-scenario Variant for the World at War: Eisenbach Gap scenario "First Moves," using counters from all of the other WaW modules.
Two more scenarios, and new counters, for the SADF Chapter of World at War that begin in LoF#8.
Plus single scenarios for All Things Zombie, Island War Deluxe, Memoir ’44, and another for World at War.


Over 61 (we counted) pages of gaming goodness.
Have it your way…professionally printed with die cut counters and cardstock maps, or a downloadable PDF.
10 new scenarios for World at War, LNL, ATZ, Tank on Tank, Dawn's Early Light, and Island War!
Counters include South African, Cuban, and FAPLA counters for World at War, new tanks (King Tiger) for Tank on Tank, an early ATGM for Lock ‘n Load, and a couple of ATZ weapons.
Maps include South African World at War map, LNL shoreline map.
PDF version is NOW available - Printable version will be shipping at the end of November.