Pathfinder Module J5 : Beyond the Vault of Souls 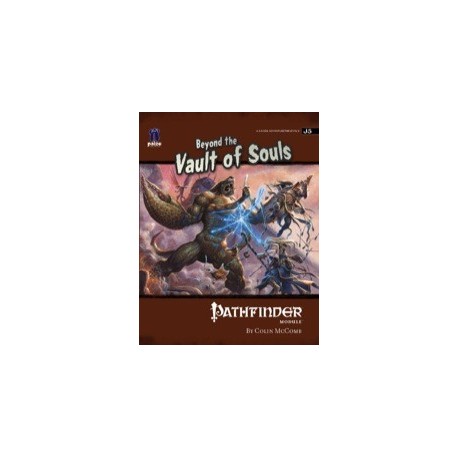 En savoir plus sur Pathfinder Module J5 : Beyond the Vault of Souls

Magical soul gems have been stolen from the secret vault of the goddess of death and scattered across the planes. Some want these gems to unlock the secrets of the multiverse. Others want them for personal power. Still others want them to resurrect a fallen deity. As the god of oblivion looms near, can the PCs retrieve the gems from their new owners in time to save their world?

Beyond the Vault of Souls is a planar adventure for 9th-level characters, compatible with the 3.5 edition of the world's oldest roleplaying game. Within you'll visit the Eternal City of Axis, brave the dangers of the Abyss, and match wits with the torturer daemons of Abaddon.

This adventure is set in the Outer Sphere of the Pathfinder Chronicles campaign setting, but can easily be placed in the strange planes and dimensions of any game world. It can be used on its own or enhanced with information from Pathfinder Chronicles: The Great Beyond-A Guide to the Multiverse.